DP walks out of budget dialogue at the Assembly

DP walks out of budget dialogue at the Assembly 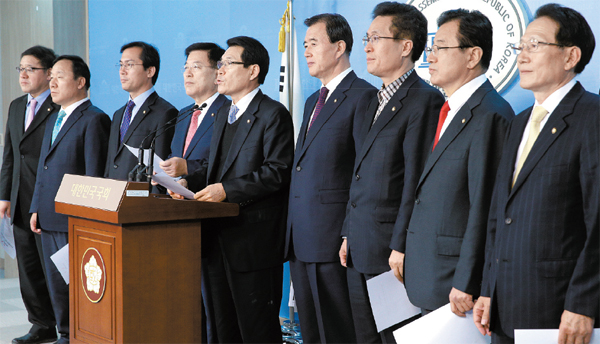 The ruling Saenuri Party’s Representative Lee Koon-hyon, who chairs the budget committee, fifth from left, and the committee members who are also Saenuri lawmakers, urge the opposition Democratic Party members to return to the committee yesterday at a press conference at the National Assembly. [NEWS1]


The National Assembly held a session to discuss next year’s budget, but lawmakers from the largest opposition party boycotted to protest the ruling party’s passage of an appointment motion for a key government post the day before.

Saenuri Party lawmakers yesterday held a session with several independent lawmakers to discuss bills on next year’s budget, despite the absence of all 127 Democratic Party lawmakers.

The Democrats were protesting the vote at the plenary session on Thursday in which the 154 Saenuri Party lawmakers voted on President Park Geun-hye’s nominee to head the Board of the Audit and Inspection, the nation’s top audit agency. The DP boycotted that vote, too.

The Saenuri Party’s Representative Lee Koon-hyon, who chairs the budget committee, apologized yesterday “for the continuous conflict and confrontation between the ruling and the opposition parties.”

But he added that the Assembly couldn’t delay discussions of passage of the bills on next year’s budget anymore and urged DP lawmakers to come back to the Assembly.

The ruling party warned the DP that if they don’t pass the budget bills by the end of this year, the country would have to be under a temporary budget system, in which the government could spend a budget based on the 2013 budget.

Under that system, the administration can’t issue new government bonds or get loans from the Bank of Korea. It can only spend on basic expenses, such as wages for civil servants but not new projects or other social welfare programs. Korea has never been under the system before.

The ruling party worries that if that happens, it would lead to a kind of shutdown of the administration.

“If the temporary budget system is launched, all of the government spending for job creation and social welfare, about 140 trillion won [$132 billion], would be suspended,” Hong Ji-man, a Saenuri spokesman, said yesterday. “About 100,000 temporary employees working at government organizations would lose their jobs, and all of the investment plans by private companies on government projects would be scrapped.”

Claiming that the ruling party “railroaded” the appointment of the Board of Audit boss Thursday, DP Chairman Kim Han-gill vowed to continue his fight with the ruling party and would stake his political career on it.

“I know there is some internal opposition to our boycott,” Kim told DP members at a closed-door meeting yesterday, sources told the JoongAng Ilbo. “But we should have a clear resolution of this matter at the end.”

As tensions escalate in the Assembly, the ruling party was preparing to propose a bill on restricting benefits for lawmakers who are suspected of violating the National Security Law, such as Unified Progressive Party lawmaker Lee Seok-ki.