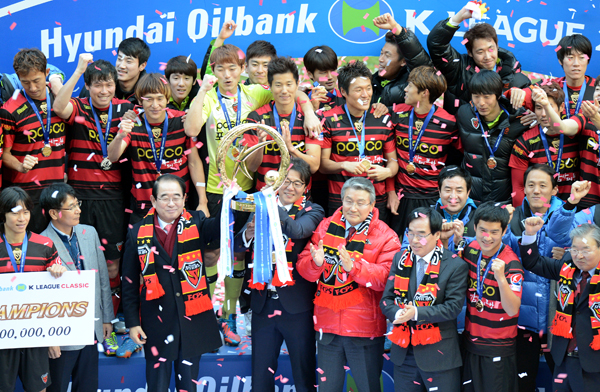 The Ulsan Hyundai Tigers were about 20 seconds away from taking the championship title on their home turf when their opponents stole their victory.

In the 2013 K-League Classic’s 40th round, the final round match, which was held yesterday at Ulsan Munsoo Football Stadium, the Steelers overpowered the Tigers 1-0 with an added-time goal by defender Kim Won-il in the 95th minute. The win makes them the first club to take two major championships in a season in the K-League’s 30-year history.

The team has the K-League championship and the Football Association (FA) Cup titles under its belt.

Before the match, the Steelers were trailing the league-first Tigers by two points, with an earned record of 20 wins, 11 draws and six losses, which gave them a total of 71 points. The Steelers eventually clinched the league by earning three points over the Tigers, who were leading the league with 73 earned points and an earned record of 22 wins, seven draws and nine losses. This is the Steelers’ fifth K-League championship title, with wins in 1986, 1988, 1992 and 2007.

The Tigers had been leading the league nearly all season, but failed to clinch the league for the first time in eight years after losing their last two matches.

The Tigers focused more on defense than offense. Two points ahead of the Steelers, they only needed to draw the match. The absence of their three best strikers, Kim Shin-wook, the leading scorer in the league with 19 goals, and Brazilian forward Rafinha and Caique, meant the Tigers had a hard time performing counterattacks, one of their key offense tactics.

As analysts predicted, the Steelers led the game with an aggressive offense. While about eight or nine Tigers players spent their time defending, the Steelers’ midfielders and forwards, preceded by midfielder Lee Myung-joo, aggressively entered the opponent’s areas, performing Spanish?style passing for a goal.

But it was hard to score a goal against the league’s best defensive team. After finishing the first half 0-0, Steelers’ Coach Hwang Sun-hong added more attackers, replacing midfielder Hwang Ji-soo with a 193-centimeter-tall (6-foot-3) forward Park Sung-ho and pairing with him starting striker Koh Moo-yul. In the 56th minute, Hwang substituted Roh Byung-jun for forward Cho Chan-ho to have more speed on the field. The Tigers didn’t have any changes in their lineup or tactics. Most of the Tigers’ players focused on defense, and forward Roberto Cesar rarely led the team’s counter attacks.

These changes had a drastic impact on the game. In the 58th minute, Koh gave a ground ball cross to Park after penetrating the opponent’s penalty box from the right side. Park, who ran into the central goal area, attempted to score, but missed the net by an inch. Cho’s mid-range shot that came out two minutes later was saved by the Tigers goalie Kim Seung-kyu, who also saved a header by Park a minute later.

As the clock winded down, the Tigers gave up on offense, placing every player on defense to counter the Steelers’ repeated attacks.

With added time running out, Kim Won-il of the Steelers kicked the ball into the right side of the net as it came his way after two Tigers defenders tried to clear it out of the free-kick zone.

“I just tried to kick it hard as it rolled over to me,” Kim recalled. “I think this is my best goal ever in my entire career.”

Afterward, about 23,000 Tigers’ fans, who were expecting an easy victory and their first championship title in eight years, lapsed into a lethargic silence.

Some outraged fans even threw empty soju and water bottles onto the field.

“I still can’t believe that we won this game,” Coach Hwang told reporters. “I truly thank the team for their wonderful support all season long.”