Latest ‘King and Maxwell’ book is the best yet

Latest ‘King and Maxwell’ book is the best yet 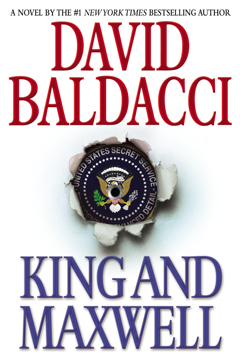 David Baldacci brings back former Secret Service agents Sean King and Michelle Maxwell to investigate yet another bizarre case in his new book, “King and Maxwell.”

King and Maxwell are private investigators now. They have a knack for poking around for answers, and the alphabet agencies tend to get upset with their questions.

While driving at night in the pouring rain, the duo almost hits a young boy named Tyler Wingo. He’s upset because he’s just learned his father has been killed in Afghanistan. They take Tyler to his home, where they see his mother, as well as the soldiers who brought the tragic news.

Something seems off, but before they can ask any questions, Tyler reveals he’s been asking questions about his father and feels like he’s been getting the brushoff.

Maxwell wants to help the young boy, but King is reluctant since the death occurred on another continent. Plus, they’ve dealt with the military and government before, and they know that getting answers can sometimes be painful. King soon changes his mind when he learns Tyler received an e-mail from his dad the day after he supposedly died.

What was Tyler’s father doing in Afghanistan? Why was Tyler told his dad is dead if he’s still alive?

Baldacci has crafted another terrific tale with two great protagonists. Just when the story line seems to veer into familiar areas, Baldacci steers it into another shocking direction.

This is the best book yet in the series.