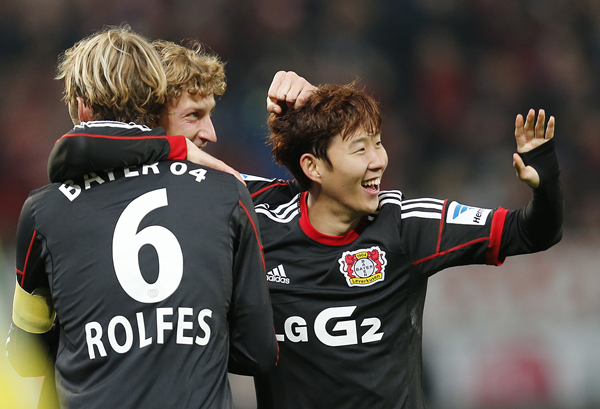 “Sonsation” Son Heung-min of Bayer Leverkusen led the team’s 3-0 victory over FC Nuremberg on Saturday in Bundesliga’s 14th round, helping them bounce back from Wednesday’s 5-0 home defeat by Manchester United.

Son started as a left wing in the offensive line along with Stefan Kiessling and Jens Hegeler, who stood in for the injured Sidney Sam.

The 20-year-old Korean forward led the team’s offense with his speed and mid-range shots.

Son got a chance to score within the first 10 minutes. Leverkusen midfielder Lars Bender made a beautiful cross to Son, who entered the goal area from the left, but he lost that opportunity with a poor first touch.

Nuremberg looked like they weren’t afraid of the league’s third-place team. Their midfielders aggressively pressed Leverkusen, and their forwards collaborated with their defenders to press Leverkusen’s attackers.

With strong pressure and defense, Nuremberg got its first chance to score in the 19th minute, but the attempt by Japanese midfielder Hasebe Makoto bounced off the goal post.

The match saw a lot of back and forth in the next 20 minutes. However, Leverkusen managed to take the lead in the 36th minute when midfielder Gonzalo Castro penetrated the left side of the penalty box and gave a clean ground ball pass to Son. Son slammed the ball into the upper left side of the net, giving the team a 1-0 lead. It was Son’s fifth goal of the season.

To make up for the 1-0 deficit, Nuremberg played an aggressive offense, but this strategy only gave Bayer’s attackers more room to score.

Kiessling scored Leverkusen’s second goal in the 2nd minute of the second half.

Nuremberg’s hopes for victory were completely destroyed 29 minutes later by Leverkusen’s Korean forward; Castro again delivered a clean pass to Son after he stole the ball from a Nuremberg defender in the center circle.

Showing off his speedy footwork, Son passed the opponent’s defense and shot the second goal with his left foot from the left side of the penalty box. It was his sixth goal of the season and the fifth in the past two matches. Son was immediately substituted by Robbie Kruse, with the home audience bursting into applause.

“Son and Castro cooperated well in this match,” football analyst Han Jun-hee said. “Son had a hard time getting decent passes from his teammates earlier in the season, but it looks like he has found his best friend on the field.”

In a Champion’s League match against Manchester United last week, Leverkusen struggled offensively without midfielder Sam, who has led the team with seven goals and five assists.

The question for this match was how Leverkusen would compensate for Sam’s absence.

“Since the match against United, Castro and I have been communicating a lot to create more opportunities to score,” Son said. “I think our plays will get better later in the season.”