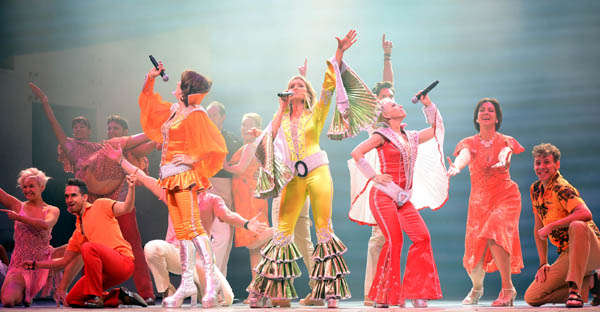 The original production team from the London production of the hit-musical “Mamma Mia!” has come to Korea for the first time. The musical is being staged at the Blue Square in Hannam-dong, central Seoul. [NEWSIS]

“Mamma Mia!,” here they go here again. But this time, it’s the original London production that’s come to Korea for the first time. This internationally-celebrated musical first appeared in Korea in 2004 and has been staged every year since then in various venues around the country. According to the Korean producer, it’s the most performed musical in Korea to date, having been performed more than 1,200 times. But all those shows were in Korean by Korean casts.

Marking the 10th anniversary of “Mamma Mia!” in Korea, Seensee Company, the Korean producer, thought it was time to bring the original production from the U.K. to Korea, and they kicked off at the Blue Square theater in Hannam-dong, central Seoul, last week.

“I was wondering what would be the best way to celebrate the 10th anniversary of ‘Mamma Mia!’ in Korea since two to three years ago. Then I thought it would be great to invite the original team from the U.K. to Korea to meet the Korean audience for the first time,” said Park Myung-sung, CEO of Seensee Company. “Many Korean audiences have already watched the Korean production of the musical. But by watching the show by the original team, I believe they can witness how Korean musical actors and actresses have developed and become competent over the past 10 years.”

When Garrington first visited Korea 10 years ago with Andrew Treagus, an international executive producer of “Mamma Mia!,” they were brought straight from the airport to the theater. Garrington said that he was being asked to look at the theater, the technical aspect of it, but to his surprise, the two were asked by Park to sit in an auditorium.

“Suddenly, the curta1in went up and Mr. Park had organized a group of his performers to sing a selection of ABBA’s songs,” said Garrington. “They sang songs like ‘Chiquitita’ and ‘Dancing Queen.’ They sang with such passion and such beauty that both me and Andrew cried. From that moment, we knew that working in Seoul would be a very special experience and it always has been since the first production of ‘Mamma Mia! in Korea.”

From that “strange, jetlagged moment,” of watching the Korean performers on stage to today, 10 years later, Garrington said, “Korea has been a particularly special country for us, out of all the countries we do this show.”

The musical “Mamma Mia!,” which was also produced as a film in 2008 with Meryl Streep playing Donna and Amanda Seyfried playing Sophie, was written by British playwright Catherine Johnson based on the songs of ABBA, the internationally famous Swedish pop group that was active from 1972 to 1982. The title “Mamma Mia!” is taken from the group’s 1975 chart-topper, “Mamma Mia.” The story centers around a 20-year-old girl named Sophie, who lives with her mother Donna on a Greek island. Sophie, who’s soon to be married to her fiance, Sky, has never known the identity of her father. After discovering her mother’s old diary, Sophie finds out that she has three possible dads and she invites them to her wedding, in the hope of discovering which is her real father.

“What makes ABBA’s songs so fascinating is that, on the surface, it’s very upbeat, very festive and very happy, but there’s always a little element of something more complicated in there, something more melancholy,” said Garrington.

A song like “Super Trouper” for example, is Garrington’s favorite number in the musical as he finds the lyrics very “moving and emotional.”

“Everywhere I go with this show, I’ve been always asked, what the secret is of ‘Mamma Mia!’ Over the years, I’ve tried to come up with more creative and imaginative answers to that question, but I think really, it’s about joy. It’s as simple as that. It brings joy to the audience. It’s not cynical and there are no villains. They are just ordinary people in a humorous situation acting in a humorous way, but somehow, the combination of the story and the music makes people feel happy.”

Agreeing with Garrington, the U.K. cast believes the “charm” of the musical “Mamma Mia!” is its message of love and friendship, which has a universal appeal, combined with the internationally acclaimed songs of ABBA.

“The musical is about young love, old love, new love and forgotten love,” said Sara Poyzer, who plays Donna. “We all understand love and we all understand friendship. When I did the show last time, I saw a 9-year-old girl dancing with her grandmother in the audience because they both understand this love and friendship of Sophie and Donna. It doesn’t matter if you are 9 or 90.”

Victoria Serra, who plays Sophie, said, “Stories about family and love will always be timeless. If you come away with only a smile on your face or find yourself dancing at the end of the show, that’s enough, but if you come away thinking about your own relationship with your mother, that’s even better.”