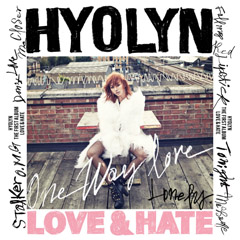 
Honestly, Hyolyn is the only member of the K-pop quartet Sistar who can really sing. On most of Sistar’s songs, the voices of the other three girls constantly get overpowered by Hyolyn, whose real name is Kim Hyo-jung, so it is not a surprise to see her go solo.

On her first album, “Love & Hate,” Hyolyn finally gets the chance to let loose and show off her powerful yet clear voice, with most of the songs on this 10-track album being ballads (along with a few uptempo numbers).

The first single, “One Way Love,” will probably be her most successful song here, although it doesn’t have any surprises. The lead-off ballad, “Lonely,” on the other hand, is more of a surprise. It shows the softer side of Hyolyn, expressing her loneliness by relaxing her voice a bit. It really shows her versatility. The music video is worth a watch. Hyolyn also shows her softer side in “Closer,” a soothing and emotional track.