Moon hints at possibility of a 2017 presidential run

Moon hints at possibility of a 2017 presidential run 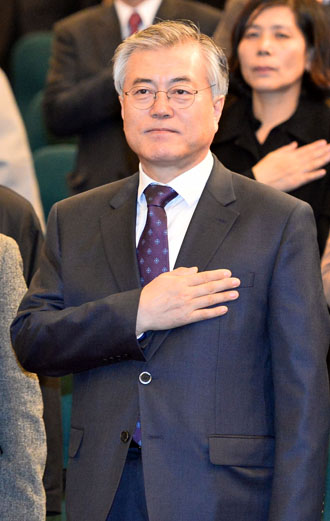 Democratic Party lawmaker and failed presidential candidate Moon Jae-in hinted at the possibility of a presidential run in 2017 during a meeting with reporters late Friday.

When asked what he would do if given the chance to run for president in the next election, Moon - who lost his bid to Saenuri Party candidate Park Geun-hye in last year’s race - said he “will not miss out on an opportunity.”

Moon also said that he is “willing to take on any role to defeat the governing Saenuri Party in the next presidential election.”

The Democratic lawmaker held the meeting ahead of the Dec. 9 publication of his memoir titled “1219: End is the Beginning,” which touches on a variety of issues - from his reflections on last year’s presidential race to his thoughts on divisive political issues and the Park administration.

Observers see his remarks as the strongest yet concerning his intention to run for president.

His comments come just a day after independent lawmaker Ahn Cheol-soo declared his intention to form a new party, a move that analysts say could facilitate his own potential presidential campaign.

Ahn withdrew his candidacy in last year’s presidential election to throw his support behind Moon so that liberal votes would not be split.

Some political analysts said that Moon’s clarified expression of interest is intended to block Ahn from mobilizing support from liberal-leaning voters.

In response to Ahn’s recent move to launch a new party, Moon said, “I owe him a lot. So I will keep my fingers crossed for him. The opposition forces will be stronger with Ahn’s presence.

“We sometimes have to compete with each other, but eventually we need to work together,” Moon continued. “I’d like to maintain a friendly rivalry with him.”

The Democratic lawmaker went on to address a number of controversial issues.

Regarding the disappearance of the original transcript from the 2007 inter-Korean summit, Moon partly admitted the fault of the former Roh Moo-hyun administration, under which he served as a presidential chief of staff.

“I could never imagine that the transcript was not properly transferred to the National Archives,” he said. “I apologize that the administration couldn’t pay full attention to the matter.

“But it’s regrettable because raising the issue was politically motivated,” he added.

He also took a swipe at the Park administration when discussing the National Intelligence Service’s online smear campaign ahead of last year’s election, which was intended to sway voters toward Park, his political rival, and compromise his chances of winning.

“The Park administration should have come clean about the issue. Instead it made the controversial issue more divisive,” Moon said. “If Park and the Saenuri Party sincerely tried to tackle the problem, the opposition party members - including myself - could have been more cooperative.”

In addition to his assessment of the current government, he also reflected on his own performance in the election, admitting that he focused too much on appealing to younger voters and failed to gain support from older demographics.

“It seems that I was locked in strict prescriptivism, with a short-term outlook,” he recalled, referring to his belated decision to run in the election despite the solid chances of winning the Democratic nomination.

After some soul-searching, he said, he learned the significance of subtlety in delivering his words.

“I also learned the importance of attitude. My overall attitude affects how the public perceives my words,” he said.