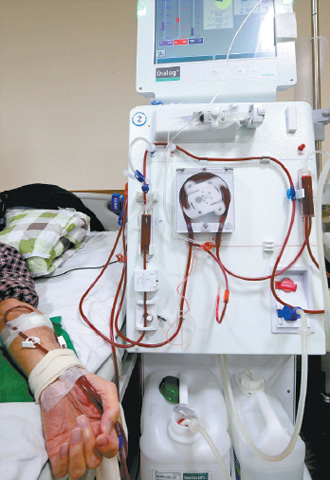 A patient in his 70s receives dialysis treatment in a hospital in Mapo District on Nov. 4. Although this particular hospital does not offer free dialysis, it said some patients ask whether it does. By Kang Jung-hyun

Mr. Sim, 46, has suffered from diabetes for the last five years. A year ago, doctors said he was suffering from kidney failure and recommended he start getting regular dialysis, a procedure in which waste products in the blood are removed by a machine.

Sim began his treatments at a hospital with a dialysis specialist. But last May, he switched to another hospital that offered the treatment for free.

Living alone and jobless, he couldn’t resist the free treatment since he could save on monthly medical expenses of up to 180,000 won ($169).

The problem was that the new hospital didn’t have a dialysis specialist. “It only had an internal doctor and two nurses,” said Sim. “One of the nurses seemed to know less about dialysis than I did.”

Sim also suffered from high blood pressure, which brought about complications with his right eye. The hospital didn’t know how to deal with them, and although he had an operation, he lost his sight in that eye.

“Sim lost his eyesight because they didn’t treat the hypertension properly,” said a doctor from Sim’s first hospital. “If they only had a dialysis specialist, the situation wouldn’t have gotten this bad.”

Hospitals are competing for patients who need dialysis because it makes them money - 90 percent of it coming from the national health insurance system.

Many more Koreans are suffering from diseases that lead to chronic renal failure, or kidney disease. 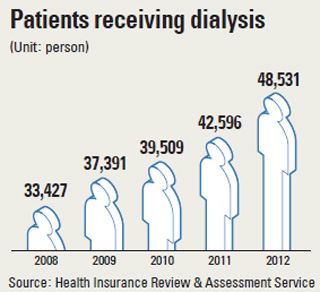 Patients who suffer from chronic renal failure need dialysis three times a week for four hours in order to survive.

So many hospitals offer the treatment for free, foregoing the 10 percent that came out of the patient’s pocket.

The number of medical institutions offering dialysis increased to 691 places, a 23 percent increase, from 562 places in 2008.

“It is estimated that tens of hospitals nationwide offer dialysis for free,” said Son Seung-hwan, a vice president of Korean Dialysis Association.

But not all clinics have doctors who know how to perform dialysis properly, or to deal with complications that come from the treatment.

Mrs. Kim, who suffered from chronic renal failure, went to a hospital in Incheon because it offered dialysis for free.

But after three treatments, she returned to her former hospital.

“There were no dialysis specialist and the doctors and nurses would just operate the machine and wouldn’t even ask how I was feeling,” she said. “While receiving the free treatment, I suffered from abdominal pain and became breathless.”

The Joongang Ilbo took Mrs. Kim back to the hospital in Incheon and asked a staffer what it offered in terms of special treatment.

“We offer free rides and provide breakfast and lunch,” the employee said. “If your house is too far from the hospital, we also provide a room within five minutes of distance.”

The employee even offered 200,000 won to 300,000 won in subsidies per month. When asked if the hospital had dialysis specialists, he answered no, but said it had experienced nurses and doctors.

According to the current medical law, it is illegal for a hospital or clinic to offer gift cards, living expenses or waive medical expenses in order to attract patients.

But some hospitals even offer commission to people who bring patients to them and provide living expenses.

A hospital run by a religious group in Gyeonggi gave kickbacks of 17 million won from June 2010 to November 2011 to five patients for 79 dialysis sessions each. The patients got kickbacks of 200,000 won for each dialysis procedure.

A court convicted them of luring patients with monetary incentives and fined the hospital 7 million won.

The hospital appealed, but the ruling wasn’t changed.

“I received 500,000 won per month for living expenses from the hospital,” said Park, a former patient of the hospital. “They have always said they would pay for me to travel overseas if I bring more patients to the hospital.”

The problem is not only breaking the law but a decrease in the quality of medical care given to patients who accept the freebies.

The Health Insurance Review and Assessment Service (HIRA) evaluated 688 hospitals that offer dialysis in terms of human resources and equipment, medical procedures and results of the treatment from last April to June.

Out of the 84 poorly rated hospitals, 18 were found to have exceeded the number of dialysis treatments per day recommended by the Korean Society of Nephrology, which is 36 times per qualified doctor. Some places even conducted 129 treatments a day by one doctor.

“The more money hospitals give to patients as freebies means less money spent on the dialysis per patient,” said Lee Jung-geon, the director of Dialysis Quality Assurance of the Korean Society of Nephrology.

According to the HIRA, there were 146 clinics or hospitals out of 688 without dialysis specialists on staff.

“There can be emergency situations during dialysis related to the patients’ diseases, eating habits or complications,” said Byeon Eui-hyung, head of the Quality Assessment Planning Department of HIRA. “Since there can be radical physical changes, dialysis should be given by specialists with plenty of experience.”

Both the HIRA and Korean Society of Nephrology are suggesting incentives for hospitals that abide by the law and have high-quality medical treatment.

Although 84 hospitals were pinpointed as being poor on the HIRA website, no actual penalties were made.

“The hospital that was rated worst for three consecutive years received the highest level of medical reimbursements,” pointed out Min Hyun-ju, a lawmaker of the Saenuri Party. “We should think about providing them with less money from insurance according to their level.”

Taiwan had the same problem of hospitals giving dialysis for free, but solved part of it by a Government-Society Certification System.

It cut 2 percent of the insurance reimbursement if the hospitals did not pass a certification, and also cut some aid when a hospital had more than a certain number of patients.