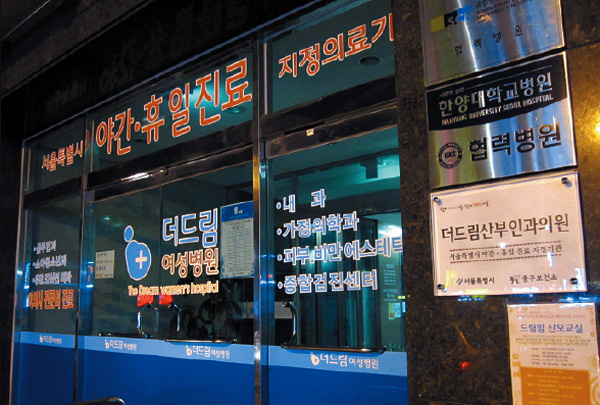 A clinic in Seoul, designated as a nighttime and holiday medical services provider, closed its door when a JoongAng Ilbo reporter visited at 9 p.m. on Nov. 12. The clinic is supposed to operate until 10 p.m. By Chang Hyeok-jin

Ms. Kim’s heart sank when her young daughter suddenly became sick on the evening of Nov. 22.

Ms. Kim was paying a visit to her parents’ house in the Jungnang District of Seoul when the 2-year-old girl developed an extremely high fever around 8 p.m. 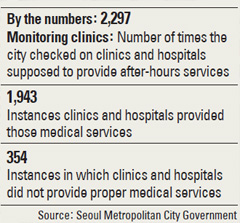 Frantic, she scoured the city for a pediatric clinic that offered after-hours services, but her search turned out to be in vain. So instead, the 32-year-old mother rushed her toddler to the emergency room of a general hospital.

“After a long wait, a doctor showed up but just prescribed antibiotics,” she said.

The Seoul Metropolitan Government has designated three hospitals in the Jungnang District to offer medical services during nighttime and holidays, but according to a recent investigation by the JoongAng Ilbo, it appears none of them have stayed open.

It has been a year since the city introduced the nighttime and holiday medical services policy, which intended to expand medical services to office workers who couldn’t access care during regular business hours. But since its implementation in November 2012, the system has faced somewhat of a crisis. Many of the clinics that claim to provide nighttime services do not stay open as indicated, offer limited treatment or offer nighttime services only some of the time.

Right now, 58 clinics around the city are designated by the Seoul Metropolitan City Government as after-hours providers. Only three of those clinics have introduced after-hours services following the city’s initiative.

The other 55 clinics claimed they had offered such services even before the city’s initiative was introduced. So while the program failed to entice many more clinics to participate, the city has started paying subsidies to the hospitals providing those services.

“We decided to sign up for the project because the management situation was bad,” said an official at a clinic in the Yeongdeungpo District of Seoul. “Because we already operated as an emergency room, there was no additional burden for us. With the subsidies, it is a great benefit to our hospital.”

But many of the hospitals that are listed as providing after-hours services fail to stay open as indicated. On Nov. 12, the JoongAng Ilbo checked 36 clinics from 9 p.m. until 10 p.m., and eight of them - or 22 percent - were not receiving patients.

An obstetrics and gynecology clinic in the Jung District, designated by the city as providing medical services during nights and holidays, is supposed to close at 10 p.m., according to the city’s website.

However, when the JoongAng Ilbo visited the clinic at about 9 p.m., a reporter was told that regular services were already over.

“Regular treatment hours ended about an hour ago,” said a nurse who was on call. “Right now we just prescribe emergency contraception pills and admit emergency delivery patients.”

In another instance, a hospital in the Dobong District said it only has an orthopedist on call. And two of the 36 clinics said patients must come an hour earlier than the stated closing time.

A survey by the Seoul Metropolitan Government showed similar results. The city checked with the clinics 2,297 times, and they were closed earlier than scheduled 247 times. In an additional 107 instances, they did not offer services at all.

“If the nighttime clinics do not have a fixed schedule, it’s better to just go to the emergency room of a general hospital,” said Jang Gwan-il, a 39-year-old patient who was receiving care at a nighttime clinic in the Dongdaemun District.

But even sporadic nighttime service isn’t available in all areas. Five of the city’s 25 districts don’t even have clinics that offer after-hours services.

Seoul’s government, however, claims the initiative has contributed to the expansion of medical services.

“The clinics that recently joined the program lengthened their service hours, so it has contributed to our goal,” said Park Yoo-mi, a welfare and medical policy official from the Seoul Metropolitan Government.

But despite the positive feedback, next year’s funding for the project was cut significantly - most likely a reflection on the initiative’s lukewarm progress. The Seoul city government asked the city council to approve 2.89 billion won for the project next year, a significant drop from this year’s allocation of almost 4.6 billion won.

Critics say the system was destined to be inefficient because it was pushed forward unreasonably.

“For a clinic to just start offering nighttime services, the initial cost is high,” said Dr. Choi Seung-il of the Seoul Medical Association.

“The association, therefore, opposed the idea from the beginning. The city is providing 6,000 won per patient, but that amount is just too low for a new clinic to [voluntarily] participate in the program.”