Protests over Jeju naval base lose some virulence

Protests over Jeju naval base lose some virulence 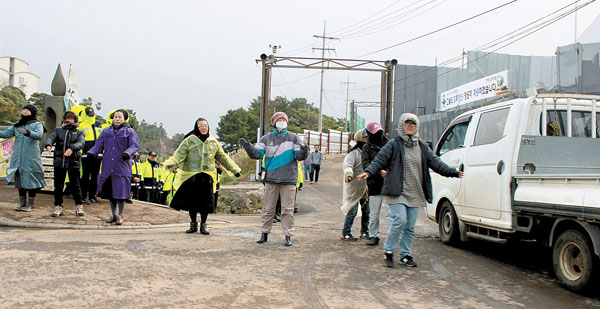 Following a Mass protesting the government’s construction of a naval base in Gangjeong Village, Jeju Island, Wednesday, anti-base protesters attend a dance with nuns.By Jeong Yong-soo

JEJU - After China included the waters around Ieodo, also claimed by Korea, in its new air defense identification zone, the southern waters off Korea are becoming more important, along with the government’s building of a new naval base near Gangjeong Village, Jeju Island.

When the JoongAng Ilbo visited the village on Tuesday, about 20 Catholic believers and priests were preparing to offer a Mass in front of a gate of the construction site.

Mun Jeong-hyeon, a leftist priest, appeared on the site in his clerical collar. In 2011, Mun led several large rallies against the base construction and stayed in a local resident’s house in the village, earning him the nickname “the priest on the street.” During a rally last year, Mun fell from a 7-meter (22-foot) tetrapod, a four-legged cement slab that lines seashores, in the village, which left him with a severe back injury.

At 11 a.m., the hour-long Mass began. Participants sang leftist songs and one featured the lyrics, “I’m protesting, protesting and protesting.”

“At 11 a.m. and 11 p.m., they always offer Masses at the same places - gate No. 1, No. 3 and the tent [near the site],” a police official in the village said. “During the Masses, they block the main gate, hindering traffic of cargo and workers in and out of the site.

“As far as I know, priests and believers on Jeju Island are taking turns offering Mass,” the official said. “They used to occupy the entrances all day long, but the protests have eased a bit now. Mostly, they’re always Masses, not rallies.”

Officials in the Korean Navy said the importance of the naval base is increasing with escalating tensions in the southwestern waters, particularly after China’s announcement on its newly expanded air defense identification zone.

“We understand the desperate necessity of a naval base on Jeju Island, as tensions are rising after China’s inclusion of Ieodo in its defense zone,” a Navy official said.

If a maritime dispute breaks out near Ieodo, the Korean Navy would be able to reach it within 8 hours from the new base steaming at 22 kilometers (13 miles) per hour, compared to the 18 hours it would take Chinese vessels from Ningbo or 21 hours from Japan’s Saseb.

Without the base on Jeju, it would take Korean vessels about 23 hours to reach Ieodo from the base on Busan, the Navy estimates.

“People say Jeju Island should remain an ‘island of peace,’ but there will be no peace without a strong defense,” another Navy official also said. “While the territorial disputes are increasingly occurring between China and Japan, protesting against the naval base in Gangjeong Village does not help the national interest at all.”

Despite the ongoing protests, the construction is coming along, Navy officials said. Some protesters have left Jeju, and the rallies of the remaining protesters are looking a bit weary.

Construction on the base is now almost round the clock. Posco and Hyundai Engineering and Construction joined the project, accelerating work.

Construction on Zone 1 is 60 percent done, the Navy said, since work began on March 7. Zone 1 will contain two piers, the headquarters of the naval base, a dormitory for sailors and a local community center for residents.

Still, construction was suspended for 14 months because of protests, which cost 45 billion won ($42 million).