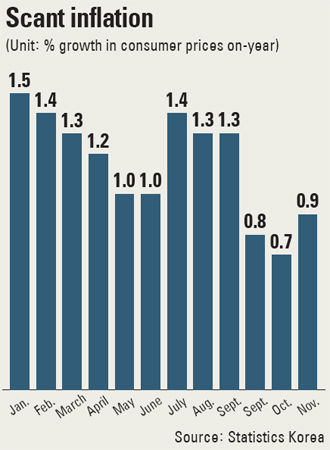 Korea’s consumer prices grew less than 1 percent for three consecutive months for the first time in 14 years since 1999.

According to Statistics Korea yesterday, consumer prices rose 0.9 percent last month year-on-year due to a 0.2 percent increase in prices of daily goods.

However, the index fell 0.1 percent month-on-month, largely due to a 2.6 percent drop month-on-month and 8.5 percent plunge year-on-year in agricultural prices, the report said.

Prices of agricultural products and fresh food slid as supply expanded during the peak autumn season, the report said.

Prices of cabbages plummeted by a whopping 34.5 percent in November compared to the previous month, along with a 5.3 percent drop in pork prices and 6.7 percent fall in apple prices, the data showed.

Owing to the stabilized agricultural and oil prices, the nation’s core inflation index remained in the 1 percent range, signaling a stable growth trend.

However, the Ministry of Strategy and Finance forecast those prices would rebound gradually in the winter if cold spells sweep the country and demand for oil spikes, leading the overall inflation rate to surpass 1 percent again.

“Since the government’s macroeconomic policy direction is to keep inflation rates under control, the current trend seems [to be] in tune with the government’s goal,” said an official at the Finance Ministry.

Housing and public utility costs climbed last month, including an average 1.1 percent hike in electricity bills after the government raised power prices by an average 5.4 percent from Nov. 21.