Few reins on budget for repairs of treasure

Few reins on budget for repairs of treasure 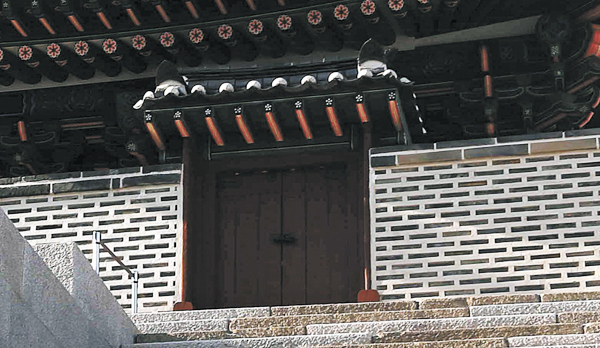 The door to the upper part of Sungnyemun is closed on our visit Sunday. Since the restoration of the 600-year-old gate was completed in May, authorities had opened the upper part to the public three times each Saturday and Sunday. But the special viewing stopped last month amid allegations that the country’s National Treasure No. 1 is suffering from damage, just five months after the restoration. By Oh Jong-taek

The Cultural Heritage Administration (CHA) did not have a full understanding of its spending on wood and roof tiles in its high-profile, costly restoration of Sungnyemun, Korea’s National Treasure No. 1, which was burned down in an arson in February 2008.

This is according to data on the five-year, three-month restoration of the 600-year-old historic gate that the JoongAng Ilbo obtained.
The data detailed how authorities utilized the budget as well as minutes of the 34 meetings with an advisory panel during the process.

To further find out just what went wrong, we also conducted in-depth interviews between Nov. 14 and 30 with CHA officials, artisans, subcontractors and other workers involved in the restoration.

Our investigation and recreation of the 1,911 days of the process found that the CHA was neither clear nor in tight control about its budget spending; artisans’ voices were overlooked and they also made compromises that they shouldn’t have; and a rush mentality and extreme focus on PR contributed to the damage of Sungnyemun.

Since October - just five months after the restoration was completed, lawmakers, media and cultural heritage experts have been pointing out that Sungnyemun is already displaying signs of damage on its dancheong (traditional color decorations for Korean wooden structures), wood and roof tiles.

Such developments have led President Park Geun-hye to take action as well. On Nov. 11, Park ordered a thorough investigation into the issue. A few days later, sources at the Blue House and the CHA confirmed that Byun Young-sup, the head of CHA, is being replaced.

The construction firm said the total money that went into the wood construction - that is, including wages, insurance fees and other expenses - amounted to 1.16 billion won.

An official at Myeongheon said, “The amount in the CHA’s data was the estimated prices we submitted when taking part in the bidding in December 2009. … As the construction went on, the price of wood changed. And also as we decided to go 100 percent traditional, prices went up even more.”

On this, an official at the CHA admitted, “Honestly, I am uncertain how much we spent on materials.”

In fact, this is understandable. The restoration of Sungnyemun, like any other construction overseen by the state, went like this: A bidding company would submit estimate prices of materials to be used in the construction, and the government later just makes sure that the company completed the job within the budget it submitted.

In other words, the government doesn’t itemize how much money was spent on each item, and so on.

“[The problem is that] the Korean government treated the restoration of cultural properties like any other construction [project],” said Kim In-han, an architecture professor at Kyung Hee University. “It is a dereliction of duty that the government had no idea it purchased which materials at what prices … as there is a possibility that it led to improper restoration.”

We also found that although artisans raised some concerns during the restoration process, their voices were often ignored.

According to our findings, in a meeting with the advisory panel on Nov. 30, 2009, Hong Chang-won, the dancheong master and Korea’s Important Intangible Cultural Heritage No. 48, suggested that in order to prevent exfoliation, it’s better to mix traditional adhesive with synthetic resins.

In fact, Hong was designated as the person to oversee the dancheong process of Sungnyemun 10 days later, which upped the chances for his proposal to get a green light. However, that didn’t happen.

The minutes of the meetings with the advisory panel showed that there were heated debates as to how to conduct the traditional coloring process. Hong continued to promote his proposal, saying using traditional adhesive only will cause it to decay, discolor and dribble in the humid monsoon season.

Nonetheless, the advisory panel kept insisting on using traditional adhesive only. In the end, according to the June 2012 transcript, the two met in the middle: Traditional adhesive would be used, but they would apply a coating of paulownia oil on top of the paint in order to lessen the chances of damage in rain and wind.

Hong told us, “Although I have been working with dancheong for the past 40 years, the method I used in Sungnyemun restoration was something that I have never used. … Because the advisory panel was adamant on using traditional adhesive only, I had no choice.”

Also notable was the finding that showed artisans attended only seven of the 34 meetings of the advisory panel.

“I was called to the meeting once. There was no name tag for me. I was just told to sit in the back. I had no say in the meeting,” one artisan said.

Another artisan said, “It just wasn’t possible for us to make any decision, structurally.”

In fact, in the minutes, one artisan actually says, “The artisans were excluded in any decision-making so far.”


On this, Yun Hong-ro, a honorary professor at Dankook University and member of the advisory panel, said, “The artisans could’ve said anything at the meeting if they wanted to. … If they weren’t happy with the outcome of the meeting, they should’ve said so.”

Critics say the Cultural Heritage Administration’s treatment of the artisans is also a problem.

Whenever the CHA held a press event, they would tout how the restoration was 100 percent traditional, invite artisans and make them speak.

However, according to our investigation, the artisans - whose areas of expertise include dancheong, carpentry, stonework and roof tiles, among others - were employed as contract workers at Myeongheon Construction during the restoration.

“The Cultural Heritage Administration said that we should hire them as our contract workers, so we signed a labor contract with them,” one official at the construction firm said. “And we gave them salaries, which were just within the symbolic level.”

Sin Eung-soo, the chief carpenter and Intangible Cultural Heritage No. 74, disclosed that the unit wages paid for carpenters were 100,000 won per person a day, which was lower than the government-designated standard unit wage of 141,000 won, and even that wasn’t paid on time. That was what led to a month-and-a-half strike during the fall of 2011.

However, even that government-designated standard unit wage, sources within the industry say, exists only in Korea and Russia, where remnants of socialism can be found. There are cases in which the wage is set at unrealistic ranges. Still others say, despite not being treated right, the artisans should not have ended up making compromises that led to the damage of Sungnyemun.

Hong, for instance, ended up resorting to a technique he’s never used before in one of Korea’s most important restorations of cultural properties. Sin also told the JoongAng Ilbo last year that there is no problem with the moisture content in the wood. However, after allegations emerged recently that the moisture content in the wood is too high, he said that, “I couldn’t inspect the moisture on the wood myself and, even if it wasn’t dried completely, we weren’t in a situation where we could wait.”

Besides, there was also a report that some artisans were being investigated by the police after they were found to have lent their license of cultural heritage repair expert.

One artisan who wished to remain anonymous admitted, “We are also partially to blame for not being able to say no in the middle of the construction. … However, in the reality where we are being treated as not artisans but laborers, it’s not easy to retain the dignity of artisans.” 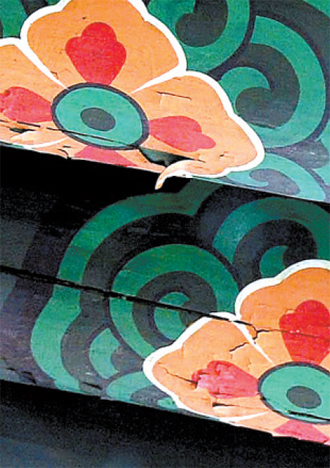 * “Rush mentality”: Coloring should have been done one to three years after construction.

* What Hong says: “Exfoliation occurred so early because we used only traditional paint and adhesive. I proposed mixing traditional adhesive with synthetic resins.”

* The JoongAng Ilbo’s experiment found a piece that allegedly used agyo, a traditional adhesive, that does not melt in hot water, raising suspicions about its authenticity.

* What Hong says: “It is because we used a coating of paulownia oil in order to prevent dancheong from being damaged in the rain and wind.”

* Critics argue that the use of color pigments and adhesive imported from Japan caused the damage.

* What Hong says: “We had to use the materials [the government] chose for us.” 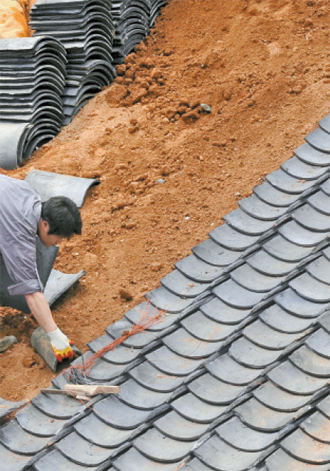 1. Possibility of freezing and bursting

* Because of high moisture content, the roof tiles will freeze and burst in the winter.

* What Kim says: “Roof tiles ‘breathe,’ which means they not only absorb moisture well and emit moisture well, too. Our two-year test has proven that they will be fine.”

* Some dented roof tiles (known as female tiles) showed signs of discoloration, which indicates the heat in the kiln was shifted to the surface evenly.

* What Kim says: “As roof tiles were piled up within a kiln, such signs could appear.”

* Some roof tiles were found to be broken.

* What Kim says: “As all roof tiles were handmade, some of them ended up with rough and uneven surfaces, which may cause them to look broken.” 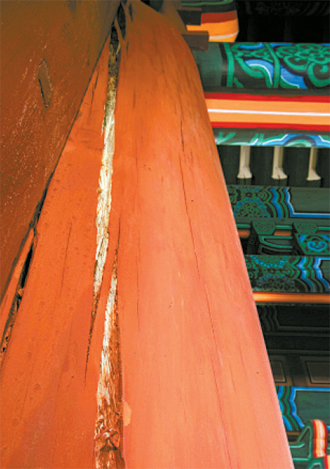 * In charge: Sin Eung-soo, the chief carpenter and Intangible Cultural Heritage No. 74

* Restoration method: Ninety percent of the bottom floor and 10 percent of the top floor used wood that was salvaged from the arson. Also, a type of rare pine tree that comes from Samcheok, Gangwon and wood donated from the people were used.

* There are allegations that a majority of wood came from the company operated by Sin.

* What Sin says: “The problem was using wood that was not fully dried. The government had already decided what wood to use. We had no choice but to follow the decision.”