To his employees, however, he is almost ubiquitous, and the company and some industry analysts say his leadership style - prioritizing kinship with employees - is behind the group’s notable growth over the past decade.

On the other hand, the company’s debt-to-equity ratio, which reached 150 percent before Chung took the helm, has been reduced to 46.4 percent. That is a record-low debt ratio for local department stores in Korea.

Things at Hyundai’s department stores, the key business sector of the Group, are going smoothly, solidifying its No. 2 position in the industry.

Many within the group give credit to the friendly, hands-on management style of Chung, a grandson of Hyundai Group founder Chung Ju-yung.

On Nov. 4, Chung took around 40 employees - from low-ranking staff to directors - who work at stores in the Seoul-Incheon area to Busan, where they had an after-work party with around 60 employees of the Busan branch.

“I know your hard work better than anyone,” said Chung, calling each of the 60 employees of the Busan branch by their names, according to a person who attended the dinner.

“Please trust me and the company,” Chung was quoted as saying. “I will make this company the workplace that you all want to work for.” 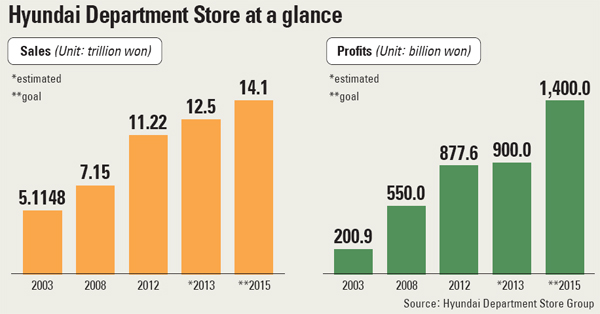 According to people within the group, Chung has never missed monthly meetings with employees since he took the vice chairmanship of the Hyundai Department Store Group in 2003.

He checks out everything for himself. A prime example is Hyundai Department Store’s COEX branch in Samseong-dong, southern Seoul, where expansion and renovation was finished in August. The chairman checked out the whole store, including all the toilets.

In the three months since the renovation, the store’s sales have increased 27.8 percent from a year earlier and sales of luxury goods soared 72 percent.

Chung’s brand-positioning strategy had a lot to do with it, according to officials of the group.

The COEX store offers 50 world-class luxury brands not seen anywhere else in Korea, including Leica, which sells cameras for tens of millions of won, Hasselblad and high-end audio brand Goldmund.

The number of VIP customers at the COEX store jumped 35.2 percent since August from a year earlier, and 24 percent had never visited the COEX branch before.

Chung is also directly managing other business sectors. Chung ordered a complete overhaul of the Hyundai Home Shopping website, which had been considered relatively weak, in the middle of this month.

Hyundai Home Shopping also introduced a new type of mobile app, and the resolution of pictures of the products is 1.7 times higher than that of existing Internet shopping sites.

The food catering arm is expected to grow 13.5 percent this year compared to last year.