Democratic Party lawmakers boycott the meeting of the Special Committee on Budget and Accounts yesterday even though the deadline to approve next year’s budget proposal passed yesterday. The Saenuri Party did not try to railroad the bill. [NEWSIS]

The National Assembly missed the deadline for passing the budget proposal for next year again yesterday - marking the 11th straight year to violate the Constitution.

The Constitution stipulates that the following year’s budget bills must be passed by Dec. 2, 30 days before the beginning of the new fiscal year.

The biggest reason for the stalemate at the ongoing session of the National Assembly is the tug of war between the ruling Saenuri Party and opposition Democratic Party over the launch of a special counsel investigation into the National Intelligence Service for its alleged interference in last year’s presidential election.

The Democratic Party has previously boycotted Assembly sessions in protest of the ruling party and President Park Geun-hye, who both refused the DP’s request for a special counsel investigation.

In an attempt to normalize the Assembly, the chairmen and floor leaders of both parties held a meeting after lunch yesterday to try to negotiate. However, the group failed to make any headway and discussion on the budget proposal was pushed back again.

The four leaders vowed to hold another round of talks today.

The Saenuri had planned to hold a general meeting of the budget committee independently and table the budget bills without participation from the Democrats, but it dropped the plan later, hoping for a positive outcome from the meeting.

The last time the Assembly met the Dec. 2 deadline was in 2003. In the majority of cases over the past 10 years, the opposing parties have continued operating in a political deadlock, waiting until the last day of the year to approve the budget bills at an extra session.

Political analysts say lawmakers have little reason to hurry because they only need to avoid the worst-case scenario of preparing a provisional budget, which is unprecedented in Korea. A provisional budget would be set around the limitations of the previous year’s budget, with the goal of minimizing its size. 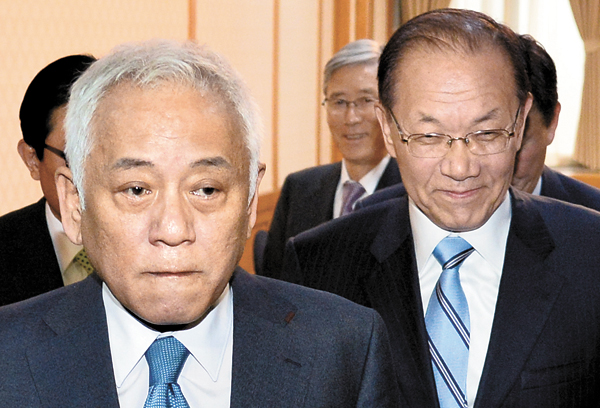 “Lawmakers are sort of laid back at the moment because they only need to pass the bills by the end of the year,” said an analyst who requested anonymity.

“They seem to think it’s natural since it has been that way over the past decade.”

But budget bills aren’t the only problem the National Assembly is facing. No bills have been passed in its 100-day regular session since Sept. 2, and the session is scheduled to wrap on Dec. 10. Only four plenary sessions are left before closure.

Even last year, when the confrontation between the two parties reached a fever pitch before the Dec. 19 presidential election, 119 bills were passed before Dec. 2.

A total of 55 bills passed the plenary session in 2011 over the same period.

The Saenuri and the Democrats have both pinpointed urgent bills for passage at the current session - with the ruling party identifying 100 and the DP pointing to 50 - but should the present standoff persist, it is likely the majority of them won’t even be reviewed.

Park Kwan-yong, a professor who served as National Assembly speaker under the Roh Moo-hyun administration, said he had never seen the Assembly in such a state.

“Why do we need a National Assembly like this?” he said. “The general public’s negative sentiment is enormous.”

Park Chan-ho, secretary general of the Federation of Korean Industries, the nation’s top business lobby, feared the budget proposal’s delayed passage could have a drastic impact on business and the economy.

“The bills related to economic revitalization should pass as soon as possible,” he said. “If corporate investments are delayed because the delayed bills hinder regulation, corporations and the national economy as a whole will be negatively affected.”

Civic groups have also stepped out to protest the lawmakers’ lack of efficiency. Citizens United for Better Society held a press conference yesterday to censure the Assembly, urging lawmakers to stop political warfare.

“The budget review is not a supposed to be used as leverage in negotiations between political parties,” the organization stated.

In an apparent move to pressure the Assembly, the Blue House yesterday drew up a release that lays out five reasons the passage of real-estate-related bills is necessary.

The realty market is a critical component in the resuscitation of the economy, the presidential office said.

With the realty bills pending at the Assembly, domestic property transactions have slowed recently. The market appeared to improve briefly after the government announced additional measures in August to revive the real-estate market and resolve the issue of affordable housing.

Economy-related ministers are slated to meet today to come up with new measures to combat these issues, the Blue House said yesterday.