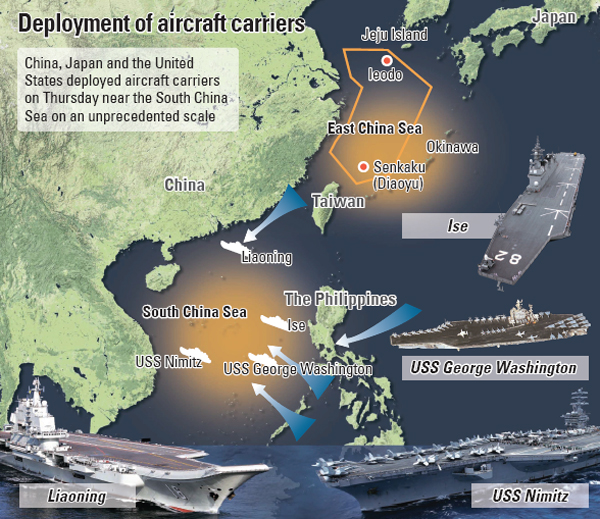 As Korea takes a tough stance against China’s unilateral drawing of its air defense identification zone (ADIZ), the government instructed Korean airlines not to notify China of their flight plans when crossing the zone.

“Because we do not accept China’s ADIZ,” Defense Ministry spokesman Kim Min-seok said yesterday at a briefing, “our government’s position is that we will not notify [Beijing] of the flight plans of our civilian aircraft and our military aircraft as well.”

Korean carriers were notifying China of their identification and flight plans after Beijing’s unilateral declaration of an expanded East China Sea ADIZ on Nov. 23. But top carriers Korean Airlines and Asiana Airlines said they would comply with the government’s position.

Japan’s top two carriers, Japan Airlines and All Nippon Airways, are also under government instruction not to notify Chinese authorities of their flight plans. Washington said Friday its airlines had been advised to notify Beijing of flight plans for safety reasons.

The Korean government is also in the process of finalizing a plan to expand its own air defense identification zone to include Ieodo and possibly Hong Island.

Korea’s ADIZ currently does not include Ieodo, also known as Socotra Rock, a group of underwater reefs located 149 kilometers (92.6 miles) southwest of Korea’s southernmost Mara Island in the East China Sea and 287 kilometers from China’s eastern Yushan Island in Zhejiang Province. It is located around 275 kilometers from Japan’s island of Torishima.

Korea’s air defense identification zone was established on March 22, 1951, in the midst of the 1950-53 Korean War, and was drawn up by the U.S air force. The United States also drew up the ADIZs of Japan and Taiwan. Over the years, Korea’s ADIZ has been criticized for not encompassing Korea’s remote islands.

Korea claims the submerged reefs of Ieodo are under its maritime jurisdiction and in 2003 opened a maritime research center atop the reef called the Ieodo Ocean Research Center to cement the point. Ieodo also holds sentimental value for Koreans, especially Jeju islanders, and is mentioned in several folk tales. Ieodo is not technically an island, so it can’t be subject to a territorial claim, but it is located in the overlapping exclusive economic zones (EEZs) of Seoul and Beijing and is effectively controlled by Korea.

Korea has had a fuzzy attitude toward these remote rocks, and opposition Democratic Party Representative Park Hong-keun said that based on a joint study with the Northeast Asian History Foundation he has concluded that only two-thirds of 132 middle and high school textbooks even mention Ieodo.

They were critical of China for rejecting Korea’s request for it to retract its new ADIZ. “We have requested numerous times for renegotiation with Japan after Ieodo was included in Japan’s ADIZ in 1969 but have been refused,” it said.

Japan’s air defense identification zone was drawn up by Washington during the U.S. postwar occupation and did not include a part of the Kuril Islands, under occupation by the Soviet Union, to prevent any provocation. Management of the ADIZ was transferred back to Japan in 1969, and Japan has expanded its zone twice. In 2010 it included Yonaguni Island, which overlaps with Taiwan’s ADIZ, causing tension.

Taiwan’s President Ma Ying-jeou also urged Beijing “to restore the East China Sea to its original state as a sea of peace and cooperation” yesterday and encouraged relevant countries to hold bilateral talks with China. Taiwan also claims sovereignty over the disputed Diaoyu, or Senkaku Islands. Ma said Taiwan has agreed to submit flight plans to China because of security concerns.

U.S. Vice-President Joseph R. Biden Jr. kicked off an eight-day Asia tour in Tokyo yesterday, and he is expected to have many talks about the ADIZ issue.