130 years of Germany-Korea ties are celebrated

130 years of Germany-Korea ties are celebrated 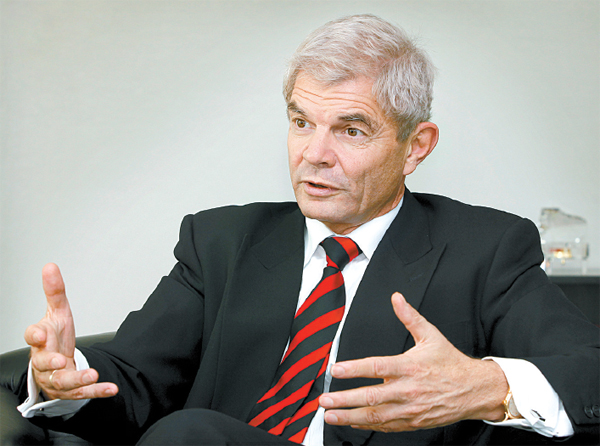 Germany’s history as a divided country has made the German-Korean partnership go beyond the typical relationship between nations. The Embassy of Germany often holds forums and events to share Germany’s experience of reunification. Last month, it hosted a conference to discuss how Korea can reconcile with its past.

This year marks the 130th anniversary of diplomatic relations between the two countries, and the German Embassy is celebrating it with a series of social and cultural events. The embassy has invited the Deutsche Kammerphilharmonie Bremen, a chamber orchestra based in Bremen, to perform at the Sangmyung Art Center in central Seoul today. Cooperation in research, economics and trade between Germany and Korea is also on the rise.

The Korea JoongAng Daily sat down with German Ambassador Rolf Mafael to discuss the evolving relationship.

Q. The Embassy of Germany recently held a forum with Korean lawmakers to discuss how to cope with the past. What kind of experience did Germany want to share with Korea?

A. We found that there is a strong interest in the issue about how to deal with the past and reconcile different political parts of society. Korea’s National Assembly is finding ways to cope with the legacy of its past: Japanese occupation, dictatorship, the democracy movement. In that sense, there are some elements that may be useful from the German experience. For example, we have a fundamental rule: Issues related to dictatorship or civil war criminals will not simply go away. There is an absolute necessity to deal with this past in an open way and find a common understanding. In the process of such endeavors, we held those who have committed crimes legally responsible. Another element is that Germany sought to develop a commemorative culture by building memorial sites. That way, we tried to rehabilitate the victims of war and persecution. But we should keep in mind such process will take a long time. As far as the Nazi past is concerned, Germany made a [new] start after World War II. But, even after some 65 years later, it is still an issue in Germany. The legacy will remain an issue for quite some time to come.

President Park Geun-hye proposed to write joint history books with other Asian neighboring countries. At the time, she gave the example of Germany working on such books with France and Poland.

I think it’s an excellent idea to put this idea forward. I hope this proposal will receive a positive response by Korea’s neighbors. If there is an interest in advice on this matter, I believe that those who have developed the German-Polish or German-French history textbooks are willing to share their experience. There are different options in making a joint textbook. One of the options is that scholars from each country sit down and work on the text together. Another is that you put together different versions of the same history or event as seen by each of the countries, and then publish the different versions together so that people can compare one to the other. This will lead to more discussion and a better understanding of the reasoning or perspectives of the other countries.

Which fields do you think have seen the most active development between Germany and Korea?

I’d like to first highlight the partnership in the economic field, which saw the most dynamic development over the last couple of years. This year saw a series of big investments from German companies in different Korean industries including cars, machines, construction and the chemical sectors. So there was a period where a German investment was announced or finished almost every two weeks. There are two main reasons for this trend. First, Korea is an attractive market, especially for companies selling consumer goods. Along with the increased investment, more and more German companies are moving to Korea to establish research centers. For example, Mercedes-Benz recently announced it would set up a research center later this year in Korea.

Earlier on, BASF, one of the world’s leading chemical company, said it would build a regional research and development center for electronic materials in Korea.

What is the reason for the increase?

There are several reasons. One is that Korea has an attractive market for consumer goods. Second, the presence of the big chaebol companies leads German companies to come to Korea because they supply important parts to the chaebol. The third is economic stability. This means that Korea can ensure the security and safety of an investment.

Does the geopolitical factor of North Korea affect investments?

I don’t think the situation with North Korea affects investments that much. The circumstance may influence the general perception of German people of Korea as a whole, but entrepreneurs and German companies who know this country’s situation in detail will not likely withdraw their investment because of the situation. I don’t know of a single case.

What kind of partnerships do Korea and Germany have in research?

The number of joint projects between Korean and German universities and research institutes has been increasing considerably over the past couple of years. Now, we’d like to establish two Max Planck centers in Korea. The institute is Germany’s biggest organization for basic research. And Korea’s leading science institutes like Kaist and Postech are cooperating with German research organizations through different joint projects.

As ambassador, what was the most memorable event held by the embassy?

This year, we were able to hold a big commemorative event to mark the 50th anniversary of the Korean government sending guest miners and nurses to Germany. At the event, some 200 miners and nurses gathered and celebrated together. We could recognize the contribution that they made to both the German economy and to the Miracle on the Han. I was really happy to see them enjoying music and performances there.