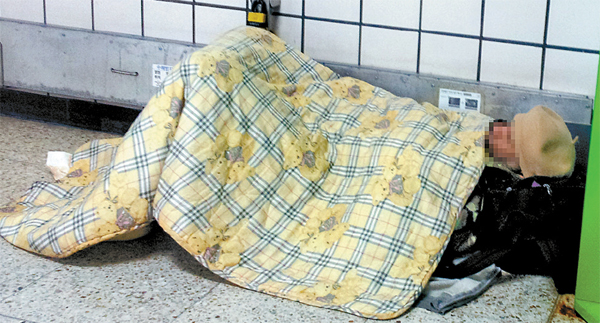 A middle-aged black man, wearing a military uniform and carrying a black backpack, stepped inside the Itaewon subway station shortly after midnight last Wednesday. The temperature outside was minus 4 degrees Celsius (24.8 Fahrenheit).

The man headed straight to his usual place in a corner of the station and removed a blanket from his bag.

When questioned, the man said his name is “Small A” but refused to say anything more. Local residents said they’ve seen him round the neighborhood since September.

“Recently, I saw him picking up some junk off the street,” said Lee Jae-suk, a 55-year-old owner of an Itaewon clothing store.

Shin Hee-ung, deputy head of Itaewon Station, said Small A spends more and more time inside the station as the weather gets colder.

In May, an 83-year-old Dutch man was discovered by the police in front of the clock tower of Seoul Station. He claimed he was a 1950-53 Korean War veteran and displayed symptoms of mental disorder.

The police sent him to a facility in Daegu in July, but he returned to Seoul Station only a few days later, where he started sleeping. Recently, his health deteriorated and he is currently at Hope Medical Center, which is run by the Seoul Red Cross Hospital for immigrants and low-income patients.

In March, the Injung Welfare Center in Yongsan District of Seoul was visited by a German man, who asked for some food. After spending a few days at the center the 53-year-old left to stay on the streets. Police and the center tried to locate him but couldn’t.

Foreigners who find themselves homeless in Korea cannot go to government-run shelters because there are no welfare regulations governing them. They are for Koreans only. There are only eight temporary shelters around the country that accept foreigners, and they can only stay in them for 20 days maximum.

According to Support Center for the Homeless, a temporary facility for homeless foreigners run by the Seoul Metropolitan Government, it provided counseling to eight people from January through September.

Currently, 10 foreigners are living at the center. Last year, the center had no visitors.

The center said the nationalities of the homeless were varied and included people from the United States, Canada and Russia.

“As of now, about 60 homeless people from various countries are staying at four temporary shelters around the city,” said Yeo Jae-hun, head of the center. “I believe there are more on the streets of Seoul.”

Of the 60, 10 are currently at the center, while another 10 are at the Seoul Migrant Workers Center. The Global Village of Love-Sharing, a private charity, is housing 40.

Another 29 homeless foreigners are waiting to enter the Multicultural Family Support Center in Ansan, Gyeonggi.

“When government-run homeless shelters take in Koreans, they receive government subsidies, but there is no money earmarked for foreigners,” said Kim Hae-sung, director of the Global Village of Love-Sharing.

An official from the Ministry of Health and Welfare admitted that foreigners were excluded from standard homeless shelters. “We have enough trouble supporting the Koreans,” he said. “It is hard to pay attention to the foreigners.”

The Justice Ministry admitted homeless foreigners are a technical headache.

“When they are visitors with valid visas, we cannot send them back home because they didn’t violate the Immigration Control Act,” said an official from the ministry.

“If we do nothing about homeless foreigners now, they can grow into a new social problem,” said Kim Young-ran, professor of social psychology at the Sookmyung Women’s University. “We need to create a system to protect them at the existing welfare centers for the homeless.”