The Songhyeon-dong site used to be filled with many trees before the summer of 2009, as seen on the left, which provided fresh air to the populated area between Gyeongbok Palace and Insa-dong. Provided by Hangang Institute of Cultural Heritage

Andrew J. Clark, an American freelance archaeologist who stays at the Somerset Palace Seoul in Susong-dong, Jongno District, on a regular basis every year, first noticed the large, empty lot across his room in August 2009.

Little did he realize that the land he was looking at - located between the Gyeongbok Palace and Insa-dong - has been a source of heated debate that involved historians, architects, teachers, politicians and even the president for the past several years.

“[When I first noticed the site in August 2009], it was merely a large vacant area,” he recollected. But when he returned to Seoul the following year, he saw people digging around the site and became very curious.

“At first, I thought it was the beginning of the construction of a new building, but then, as the work went on, and to my great surprise, building foundations were revealed. Then I realized that it was an archaeological excavation. I guessed that it probably was a ‘rescue excavation,’ and most likely it was the prelude to major construction work at the Songhyeon-dong site,” he said.

The land - known as the Songhyeon-dong site after the name of its administrative district - has been making headlines for a few years now ever since Korean Air bought it in 2008 with plans to build a “cultural landmark,” which would include an upscale hotel, a performance hall, a gallery and a shopping center. 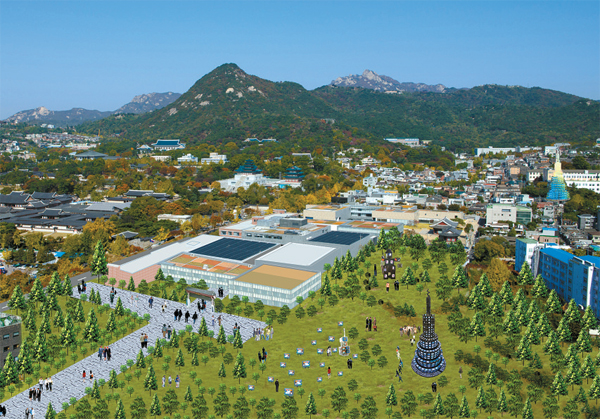 The architecture community is calling for the site to include a public space, perhaps in the form of a park. Provided by Kwangjang

However, the land is no ordinary site for a new building. Historically speaking, the 37,142-square-meter (nine-acre) site used to contain housing for royal families and government officials, in addition to organizations affiliated with royal matters. And environmentally, it is the last remaining and the largest undeveloped and open site in the historic area around Gyeongbok Palace. In fact, it got its name - Songhyeon, which means “hill of pine” - because the area used to be filled with many pine trees, giving a breath of fresh air to an area with many buildings and human traffic.

However, these are the smallest of the roadblocks. It’s not unusual for development-obsessed Korea to erect new buildings on historic sites or in forests.

The site is enclosed by three schools - namely, Duksung Girls’ High School, Duksung Girls’ Middle School and Pungmoon Girls’ High School. In principle, it is illegal to build a hotel close to schools. According to Korea’s School Health Act, a hotel is not allowed to be built within 50 meters (164 feet) of a school, and in order to build a hotel within 200 meters, builders need to obtain a green light from educational authorities. 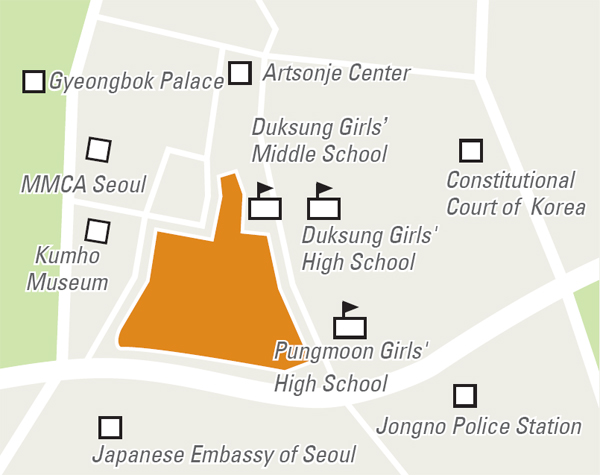 That is why even one of the wealthiest and the most powerful business tycoons is having difficulty developing the land.

However, looking at the recent political landscape, Korean Air’s envisioned “cultural landmark” appears to have gained momentum, with President Park Geun-hye, among others, at the forefront of the forces supporting the project as well as other tourist hotels near the schools, saying it will solve the chronic problem of a lack of accommodations for tourists and help Korea’s tourism sector, and eventually the country’s economy.

The Songhyeon-dong site has changed hands over time, however, there is one thing that has remained the same: It’s always been at the center of power.

In addition, many organizations related to the royal court of Joseon were located there. They include the home of Eombi (1854-1911), the second wife of King Gojong (1852-1919); Gamgodang, where Queen Myeongseong (1851-1895) lived briefly; Saganwon, or the Office of Special Counselors; and Jongchinbu, the Office of the Royal Genealogy.

After Joseon collapsed to Japanese encroachment and the 35-year Japanese colonization began, the land was used for employee residences of the Chosen Shokusan Bank. After Japan was defeated in World War II, the U.S. government became the owner of the land and built residences for employees of the U.S. Embassy in Seoul.

As the United States sought to move the residences elsewhere, Samsung Life Insurance purchased the land from the U.S. government for 140 billion won ($131.8 million) in 2000. Samsung also hoped to build cultural facilities, but the site’s proximity to schools made it drop the plan. In 2008, Korean Air bought the land for 290 billion won.

He added that the relics recovered included ceramics, roof tiles, tools, metalware and coins from the 19th and 20th centuries.

Critics of Korean Air’s plan say that in addition to violating the hotel-proximity law, the land is just too valuable to be used as a site for a hotel. 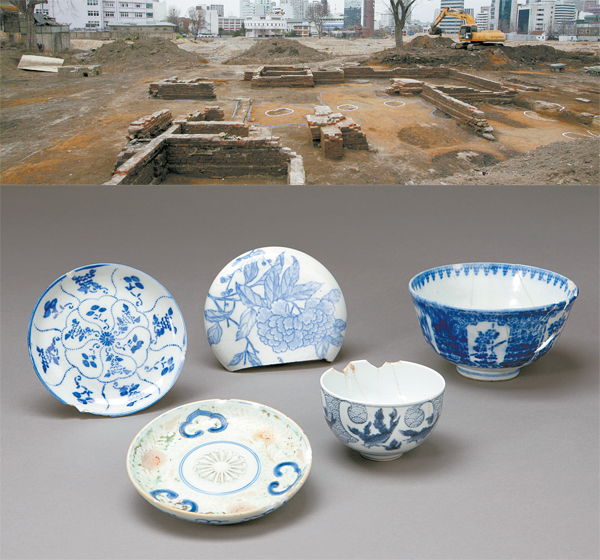 During the excavation, 23 building foundations from the late Joseon Dynasty (1392-1910) and seven building foundations from Japanese colonization, as seen on the far left, were found. Also, many relics were recovered, including ceramics, on right, roof tiles, tools, metalware and coins from the 19th and 20th centuries. Provided by Hangang Institute of Cultural Heritage

“The site is dotted with important relics of Korean history. Building a hotel here is ignoring the country’s precious history,” said Hong Seong-tae, professor of cultural content at Sangji University. “Songhyeon-dong is located right next to Gyeongbok Palace and at the southwestern entrance of Bukchon. … Depending on how the site is developed, Seoul’s [landscape] could advance or dilapidate.”

(Bukchon has a cluster of centuries-old hanok, or traditional Korean houses, and refers to 11 administrative areas such as Gahoe-dong, Je-dong and Gye-dong.)

It’s true that newspaper headlines such as “Chaebol hotel right next to Gyeongbok Palace” have been evoking frowns.

However, Korean Air has something to say about this.

“The hotel is just a little part of our plan for a ‘culture landmark,’?” one of the company’s representatives said. “Also, the hotel is a small one, with just 150 rooms.” Most of the five-star hotels in downtown Seoul have somewhere between 200 and 400 rooms.

Korean Air further explained in a statement that its “goal is to make a culture landmark where cultural and commercial entities like a performance hall, a hotel, a gallery and a shopping center co-exist, and which can represent Korea.

“The multilateral culture complex in Songhyeon-dong will help alleviate the shortage of upscale accommodations in Seoul, in line with the government’s tourism promotion policy. … It will also contribute to the preservation of our cultural heritage nearby, and be in harmony with the scenery of Bukchon.”

It’s true that the lack of accommodations for tourists in Seoul has been pointed out many times. There are reportedly 27,000 rooms in Seoul, which is far lower than other cities like New York, Paris and Hong Kong. The number of tourists coming to Korea broke the 10 million mark last year.

However, many experts say what Korea needs is business hotels with reasonable rates, not necessarily seven-star hotels as Korean Air’s envisioned hotel is known to be. Also, if the hotel is as small as Korean Air alleges, the effect that one hotel will have on easing the shortage will be limited.

Against this backdrop, not just historians but also architects have joined in opposing Korean Air’s plan.

Kim Won, the head of Kwangjang, an architect firm, suggested that Korean Air should trade with Jongno District Office for its current site, then Korean Air could build the culture complex there. Then, Jongno District Office, which has been planning to rebuild its office, would have a new property to build on and could leave a large part of it as an open space for the public - perhaps by installing a sculpture park.

In fact, Kim Young-jong, the mayor of Jongno District Office and a former architect, first made the offer to trade the sites in 2010.

“Just look at the photograph of the Songhyeon-dong site,” Kim Won of Kwangjang said. “I just cannot imagine building a hotel in this amazing area. It’s only right that a public facility be built here. … Jeongdok Public Library, Artsonje Center and the National Museum of Modern and Contemporary Art’s new Seoul branch already run a shared program. Jongno District Office can also join in.”

When asked about this proposal, a Korean Air representative said it’s not simply a matter of trading land.

In terms of fighting against the School Health Act, things haven’t been looking good for Korean Air for the past three years.

After the Jungbu District Office of Education rejected Korean Air’s plan for its “cultural landmark” near the three schools, the air carrier took the matter to the courts.

In April 2010, Korean Air filed a lawsuit against the Jungbu District Office of Education and lost; in December of that year, it appealed and lost again; in February 2012, it appealed to a higher court and lost once again.

And in August 2012, Korean Air filed a complaint with the Constitutional Court, saying the law is unfair and infringes on professional freedom by categorizing top-notch tourist hotels along with inns, motels and other hotels.

Around that time, the Ministry of Culture, Sports and Tourism extended a helping hand, proposing a revision to the School Health Act so that it would allow tourist hotels without entertainment facilities to be built near schools.

That proposed revision has been sitting on the National Assembly, neglected for more than year.

However, there was a game changer in August: Cho Yang-ho got a chance to meet President Park, who was inaugurated in February. In her first meeting with top conglomerate chiefs, Cho reportedly asked Park to allow the building of the culture landmark in Songhyeon-dong.

Since then, there have been signs that Park supports Korean Air’s plan.

The following month, Park ordered policy makers to seek ways to allow construction of certain hotels in school zones at a meeting promoting trade and investment.

And in November, Park promoted the benefits of allowing certain hotels establish themselves in school zones in her speech at the National Assembly.

That same day, even the Education Ministry jumped on the bandwagon, announcing that it will allow businesses that want to build hotels within 200 meters of schools explain their business ideas to education authorities starting next year.

Baek Yeong-hyeon, the principal of the Duksung Girls’ Middle School, told Korean media, “We cannot stop businesses from explaining their business ideas, but if these lead to approvals, that’s a different story,” adding that one hotel could greatly damage the educational atmosphere.

While the government argues that the revision is not just for the hotel envisioned by Korean Air, but also concerns more than 43 others, Ha Byeong-su, the spokesman for the Korean Teachers and Education Workers’ Union, told a Korean newspaper that “the president’s words and a company’s [ambition] have prodded the Education Ministry to allow harmful facilities to encroach on school zones.”

In addition, a revision to the School Health Act was among the 15 bills that the Blue House urged the National Assembly to pass as early as possible on Monday.

Meanwhile, Clark from the United States says, “I do not have the knowledge to comment on the legality of building a hotel close to schools. … However, Anguk-dong already is a very crowded area. Any decision about the future use of Songhyeon-dong has to consider that very seriously.

“I think the most important consideration is the preservation of the panoramic view of the mountains behind Songhyeon-dong. The history of Songhyeon-dong also should be part of its future.

“If these considerations can be successfully incorporated into a hotel, great, but if not, then I favor the conversion of Songhyeon-dong into a noncommercial, park-like space in which the landscape and the history of this storied locale can be appreciated.”