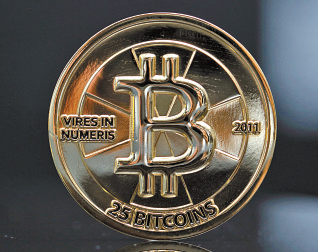 The first Korean transaction of the most successful virtual currency, bitcoin, was made at a Paris Baguette store in Incheon yesterday.

But no transaction has been made there yet, so the bakery run by 55-year-old Lee Jong-soo was the first successful transaction of a real purchase.

The bakery started accepting bitcoins on Dec. 1. It took three days for the actual transaction to be made. The first transaction became known after a blogger posted a notice on the Internet. The blogger posted pictures of the store with a sign reading, “Bitcoins accepted here” on its entrance.

The shop owner said he was first introduced to the virtual currency by his 25-year-old son who is studying in the U.S. His 29-year-old son, a computer programmer, helped the father get the app to accept bitcoins.

The payment process is fairly easy. The customer has an application known as a wallet that contains bitcoins. Then, by using a currency converter app, the purchase is made.

The news of bitcoins being used in an actual purchase sparked interest in Korea, which is just waking up to the whole notion of a virtual currency.
Established institutions like the Bank of Korea have shrugged off bitcoin as a fad that appeals to techies and said it won’t have a significant impact on Korea’s real economy.

The fact that an actual purchase has been made may prove them wrong.

The market quickly responded with IT shares, which were dubbed “Bitcoin related stocks,” rising sharply.

SGA Corp. a software security developer, saw its stock rise to the daily limit of 15 percent to close at 845 won.

Other security software developers - Hansol Inticube, Tobesoft and Softforum - all saw their stocks go up. Even so, the tech-heavy Kosdaq dipped 0.88 percent to close at 508.16.

So what are bitcoins?

It’s not an entirely new thing that “cybermoney” has been created and traded. To Koreans, the most well known virtual currency has been dotori, or acorn, which has been used to buy images to decorate personal home pages, download music or even send virtual gifts on the once-popular social network Cyworld.

Unlike dotori, where the transactions had to be online, bitcoins can be used to make purchases of actual goods and services just like hard currencies.

It is a decentralized open source virtual currency that is traded peer-to-peer. In other words, it is a currency for commerce that doesn’t need to go through any other institution, like a bank or credit card company. For that reason, there are virtually no fees, which is particularly useful for transfers of large amounts of money.

Whether bitcoins actually catch on as a medium of exchange, however, is a source of endless debate. A writer in the Atlantic recently compared bitcoins to the Segway scooter, a phenomenon with a lot of buzz and very little practical future. 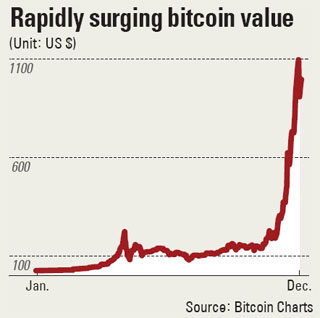 After opening an account, a person can actually create a bitcoin through a process called “mining,” where a complicated mathematical problem is solved. These algorithms are so complicated that they need supercomputers to solve them. That limits how many bitcoins will ever be created: 21 million.

Most people will simply buy them with hard currency.

The transactions are all public, but the identity of the trading partners need not be. No one has to turn in a certificate for identification when opening the account.

The virtual currency was developed in 2008 by someone using the pseudonym Satoshi Nakamoto. There is no specific information on whether it was a single programmer or a group of programmers.

Bitcoins worth $13.3 billion are circulating around the world. It is said that 300 million won worth of bitcoins are traded at Korbit, a Korean Bitcoin trading exchange, according to bitcoin Charts.

The fluctuating value alone has called into doubt whether bitcoins will ever be useful. So far, many owners are hoarding them hoping the fad will make them increase in value. But consumers won’t normally choose to use a currency that fluctuates wildly for ordinary commerce.

Many established institutions and governments are accepting the virtual currency as legal tender.

The German Finance Ministry in August accepted the virtual money as a legitimate financial instrument.

Similar moves are being seen in the U.S., where bitcoin transactions are most active. During a U.S. Senate Committee hearing on Nov. 18, the Department of Justice accepted the virtual currency as a “legal means of exchange.”

In a letter sent to the committee last month, Bernanke wrote, “Although the Federal Reserve generally monitors developments in virtual currencies and other payments system innovations, it does not necessarily have authority to directly supervise or regulate these innovations or the entities that provide them to the market.”

In contrast, the Korean central bank does not consider it a virtual currency.

During a National Assembly hearing in October, the Bank of Korea said the possibility that bitcoins could be used as an means of payment was exceptionally low. It cited their limited use in the global market and the instability of their value.