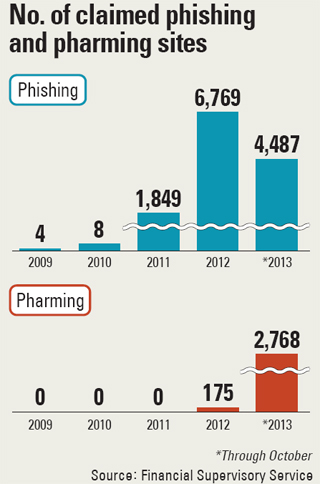 When a man nicknamed “A” tried in September to transfer 1.61 million won ($1,517) to a friend through online banking, he experienced what he thought was only a glitch.

When he was about to make his final click for the transfer, his computer screen blinked several times and he was suddenly logged out of his bank’s site. He thought that it was a computer problem and logged in again to complete the transfer.

Only later did he realize the destination bank account number had been changed and the transfer increased to 2.9 million won. He asked the bank to suspend the payment, but the money had already been taken out.

“A” was a victim of a new type of financial scam police call “memory hacking.”

As part of efforts to counter new financial-scam activities, the government yesterday announced a package of measures.

They include a new system where financial consumers are allowed to wire large sums only to accounts that have been registered, and harsher penalties on not only owners of borrowed-name bank accounts but anyone who uses the account.

The measures were announced yesterday jointly by the Ministry of Science, ICT and Future Planning, the Financial Services Commission, the Financial Supervisory Service, the Justice Ministry, the National Police Agency and the Coast Guard.

According to the ministries, to prevent illegal money transfers and payments, it added more steps to the personal certification process when making small payments using a mobile phone.

They also said that when transferring money online, there will be an added pop-up so consumer can double-check the payment and recipient.

And to prevent memory hacking, the government said it will advise financial institutions to enhance their online security programs and, since many financial scams are traced to an IP in China, it will expand cooperation with the Chinese investigative unit.

In recent years, the government has introduced various measures to prevent financial scams, however, every year new schemes appear, the FSC said.

Figures show that although voice-phishing activities are declining, incidents of memory hacking are on the rise.

“Previous measures were mainly focused on how to deal with financial scams after they happen, but the measures today are more focused on prevention,” said Oh Seung-gon, an official from the Science Ministry.