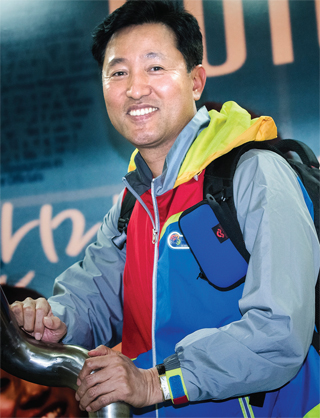 Former Seoul Mayor Oh Se-hoon was once widely regarded as a central figure in the mainstream political arena. But he vanished from the public scene after he resigned over a failed referendum on free school lunches two years ago. At the time, he staked his mayoral position on the referendum; an unprecedented move in Korea’s political landscape. His successor, Park Won-soon, is now at the helm of Seoul.

Oh has spent most of time abroad since resigning and is set to leave for Peru to share his administrative expertise there.

The JoongAng Ilbo sat down with Oh to discuss the controversial decision and his future plans.

A. I received a letter from Deoksoo Lee, former vice mayor of Seoul, last June and it inspired me to take action. He had served voluntarily as a policy consultant in Ecuador since December 2012. I was impressed, because he could have a more comfortable and relaxing life in Korea as a retired government official. His letter was full of dynamic daily episodes like spending 15 hours cooking breakfast. He said it was tough but meaningful. It was touching. In the end, in July, I decided to leave.

Why did you choose Peru?

One of the requirements for the position was at least 10 years of work experience in a field. My four-year law career and five-year tenure as mayor met this requirement. Health matters, too. This year, for example, 11 of 100 applicants failed medical examinations. Those applicants applying for developing nations or countries with tropical climates should receive four injections to prevent tetanus, typhoid fever, pneumonia and flu. In my case I applied for three countries in Africa and three in Central America but got no response from the African countries. Ecuador and Peru answered, and Peru’s response was especially welcoming. So I decided to go for Peru, and started learning Spanish for three months.

Do you go there with your family?

No, applicants are required to go by themselves. The minimum period of stay is six months but can extend up to three years. Koica covers round-trip airfare and pays $4,000 per month for living expenses.

What are you expected to do in Lima?

Sharing my administrative expertise is the official duty. But I don’t think it’s all about instruction, because I myself will learn a lot. Lima is a desert city that lacks drinking water and housing. People live with severely polluted air and poor public transportation. I will try to discuss with officials there about how to improve the public transportation and reduce air pollution, drawing on my experience as Seoul mayor. I am really excited to meet Peru’s president, Ollanta Humala, because he is well aware of how Seoul has worked in these sectors from his public service experience at the Embassy of Peru in Korea.

Some believe you need to be in Seoul to support your party members racing in next year’s election. They may think you are leaving Korea to evade the role.

No, not at all. The election will proceed smoothly as candidates declare to run, and I regard myself as having little to do related to the election. Also, I may feel uncomfortable to be here during the period. It is just coincidental that my leaving for Peru will overlap the local elections.

Is the trip for self-reflection? Some interpret your frequent overseas trips as a way to stay away from any political involvement.

I stepped down after 14 months in the middle of a four-year term. Whatever the reason is, I am guilty because I failed to meet expectations of those who trusted me and voted for me. Some would say my failure helped boost the standing of two politicians: Ahn Cheol-soo and Park Won-soon. I really want to apologize for not fulfilling the task and responsibility.

If so, do you have any plans to come back ahead of the election?

Once landing in Peru I can’t leave the country for six months. Thus I won’t be able to visit Korea. Such conditions should be observed because it’s a rule. I am required to submit a health report, interim reports and a final report once a month, too. I’ll stay only in Peru for the given period.

Do you still have the same kind of objection toward universal free school meals?

At that time, as a Seoul mayor, my thought was clear. Democrats campaigned for universal free school meals, glamorizing it as a welfare policy to give the same amount of money to everybody regardless of their income level. But I don’t regard it as a welfare program beneficial for everybody. I felt that the policy could amount to a huge burden on this country. Thinking back, my handling of the situation was a little rash. But I still believe that the universal welfare program is not the right way to go. We should provide more benefits to people in need. I don’t consider giving away financial subsidies for all to be a welfare policy.

But you may feel somehow regretful.

Of course I do. A policy is the result of public servants’ hard work. The process always accompanies a very long laborious, painful process. So policy makers tend to have a great pride in their policies. I can’t say that I feel nothing when I see my policies completely scrapped by the successor.

Some criticize you as being too focused on big-budget projects.

Among the whole budget, the amount of welfare spending expanded by 20 percent in my early term to 30 percent five years later.

But few people see me as a mayor who worked for better welfare conditions.

The term “design mayor” was given to me because I brought a new concept of design into various administrative projects for the first time. Misleading information is almost inevitable because the public sees me through the media.

Many projects you initiated have been scrapped under the current mayor. How do you feel about that?

It would be a lie if I said I don’t have anything to say about the work Mayor Park has done. But if I begin talking about it, it will turn into squabbles between the previous and current mayors, which may also disappoint voters. The public will judge Park and his work in the election coming next year.

Some public opinion polls show that you have quite high ratings as a potential contender for the Seoul mayoral election. Will you resume your political career?

I don’t know. I have not made a public appearance for the past two years. I am so grateful that people still remember and support me. It’s regrettable that I can’t meet their expectations. But now I think it would be wonderful if I can be of some help to the international community by working in Africa or Southeast Asia after finishing the job in Peru.