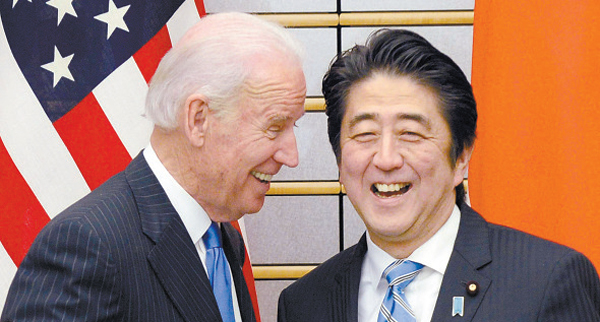 U.S. Vice President Joseph R. Biden Jr. emphasized the need for a strong three-way partnership among Seoul, Washington and Tokyo as he flew into the region and held talks with Japanese Prime Minister Shinzo Abe yesterday.

The two held a joint press conference in Tokyo to show a united front in response to China’s unilateral declaration of an expanded air zone 10 days ago.

Biden said the United States is “deeply concerned’’ about China’s attempt to unilaterally change the status quo in the East China Sea. “This action has raised regional tensions and increased the risk of accidents and miscalculation,” Biden said, adding he plans to convey such a message to Chinese President Xi Jinping.

“Northeast Asia will be strongest when its two leading democracies work together to meet common threats,” he said, “and when the three of us - the United States, Japan and the Republic of Korea - work together to advance common interests and values.”

Biden’s trip comes at a time, however, when Tokyo’s relationship with both Beijing and Seoul has been rocky due to historical and territorial disputes whipped up by the rightist Abe government.

The Abe and Barack Obama administrations have pushed forward with policies to beef up Japan’s military, which has worried victims of Japanese aggression in the past, including Korea and China.

“We welcome the steps Japan has taken to explain these efforts to its neighbors to prevent misinterpretations,” Biden said in the interview.

The two countries agreed in October to modernize their bilateral defense guidelines and the United States has backed Japan’s bid to regain its so called right to collective self-defense, or to come to the aid of an attacked ally.

Biden arrived in Tokyo Monday for a week-long Asia tour that also includes Beijing and Seoul.

Referring to China’s expanded ADIZ, Biden said in the interview, “This latest incident underscores the need for agreement between China and Japan to establish crisis management and confidence-building measures to lower tensions.”

Korea is in a more difficult position because its relations with China have never been as close as in the recent past. But after China announced its bigger ADIZ, Seoul announced plans to study enlarging its own.

That might not be welcomed by Japan or by the U.S., which originally drew up the ADIZs of Korea, Japan and Taiwan.

The Korean government has announced it’s studying expanding Korea’s ADIZ to include Ieodo in the East China Sea, which lies in the air zones of China and Japan, and possibly other remote islands as well.

While a plan to expand Korea’s ADIZ is said to be in its final stages after a meeting Sunday presided over by the Blue House chief national security adviser, government officials say Korea has to anticipate Washington and Beijing’s reaction.

Such a decision may be postponed until after Biden’s Seoul visit.

Kim Min-seok, spokesman of the Ministry of National Defense, said at a briefing yesterday, “An announcement in regards to the ADIZ has been delayed for the time being.”

After talks in Bejing, Biden is set to arrive in Seoul on Thursday for a three-day visit. His visit will be the longest of the three countries on his Asia trip. It is also meant to celebrate the 60th anniversary of the U.S-Korea alliance.

The Ministry of Foreign Affairs said Biden is slated to meet President Park Geun-hye on Friday and give a speech to students at Yonsei University on U.S.-Korean relations.

He will also visit the demilitarized zone (DMZ) and the War Memorial of Korea.

National Assembly speaker Kang Chang-hee departs today for a four-day visit to China, where he is expected to meet President Xi Jinping on Friday and other leaders.

Special interest is being put on whether he will convey a message from President Park Geun-hye in regard to China’s expanded ADIZ in the East China Sea.