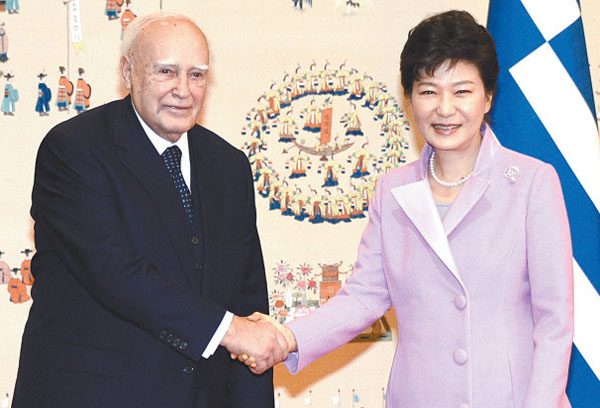 Korean President Park Geun-hye, right, poses with visiting Greek President Karolos Papoulias yesterday at the Blue House prior to their summit, in which Park asked for continued cooperation in the shipbuilding industry. [NEWSIS]

President Park Geun-hye yesterday held a summit with Greek President Karolos Papoulias, in which she asked for continued cooperation in the shipbuilding industry and on construction projects.

The Mediterranean nation - recovering from a government-debt crisis triggered by the global economic recession in 2008 - is currently in the process of privatizing public companies related to aircraft, railroads and shipbuilding.

Papoulias was invited as a state guest to mark the 60th anniversary of the end of the 1950-53 Korean War. The 84-year-old president is the first Greek president to visit Seoul. He previously visited the country in 1987 as a foreign minister.

“Your visit to Seoul is particularly meaningful this year because it marks the 60th year of the end of the Korean War,” President Park said. “Greece dispatched 10,000 soldiers a year [during the three-year war]; Koreans will never forget that Greece is our solid ally that fought together with us until the war was over.”

The two politicians met in Greece in 2011 when Park was sent as a special presidential envoy to celebrate the 50th anniversary of the diplomatic relations between the two countries.

Greece was the first country to place an order with Korea when Korea launched its shipbuilding business.

Park noted that Greece was a decisive factor in propelling Korea to the top spot in the global shipbuilding industry. Between 2010 and August 2013, the orders Korea received from Greece were the highest in the world, accounting for a quarter of the total. President Park also expressed hopes that both countries could further expand cooperation in a variety of fields, from trade and investment to infrastructure and communications technologies.