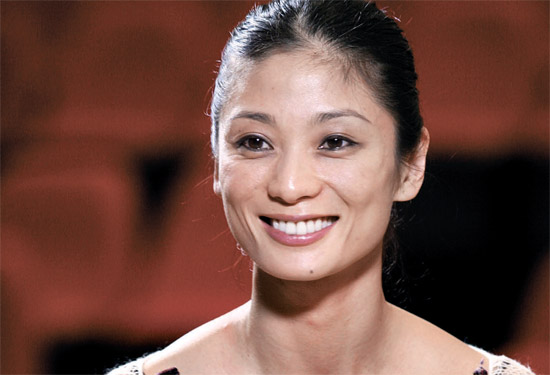 Internationally renowned prima ballerina Kang Sue-jin, 46, currently with the Germany’s Stuttgart Ballet, may be headed back to Korea.

According to the Ministry of Culture, Sports and Tourism yesterday, Kang has been nominated to serve as the artistic director at the Korean National Ballet, a three-year post that would begin next year and can be served consecutively.

The current director, Choi Tae-ji, who has held the position for 12 years, will see her term expire on Dec. 31.

Kang studied at Seoul’s Sun Hwa Arts School and went on to attend the Academie de Danse Classique in Monaco. After graduating, she entered the Stuttgart Ballet when she was just 18 years old, becoming the youngest starting member and the first Asian in the company’s history.

In 1997, after 11 years, she was appointed as its principal dancer.

The Culture Ministry said it nominated Kang to lead the state-run ballet company for the next three years as she “will be able to help Korea’s ballet take a new leap forward internationally, as she has abundant experience on global stages.”

Kang is widely considered to be a role model for aspiring young Korean dancers.

“I am so happy that I have this opportunity to serve my motherland,” Kang said upon hearing the news.

She added that she will do her best to further develop ballet and the arts in Korea.

Kang’s last performance in Korea was in June 2012, when she performed in “The Lady of the Camellias” as the tragic heroine Marguerite Gautier. It was that role that also earned her the prestigious Prix Benois de la Danse in 1999; she was the first Asian to win the prize.

Prior to her last performance, she said that she was not considering retirement yet, but that it was likely that “The Lady of the Camellias” would be her last full-act ballet in Korea.

She published an autobiography early this year titled “A Passionate Heart Takes a Long Breath.”