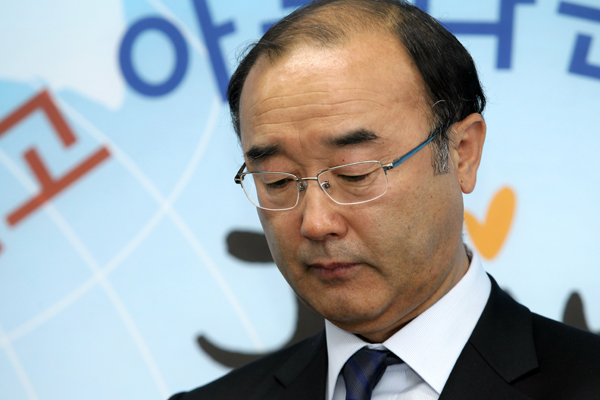 Han Dong-joo, the sacked mayor of Seogwipo, the city that comprises the southern half of Jeju Island, held a press conference yesterday to deny that he had a deal with the governor to be reappointed when his term ended.

“I never made a pay-off deal with Governor Woo Keun-min or talked about the election next year or about my mayorship,” said a grim-faced Han before reporters at the Seogwipo city office yesterday, three days after he was sacked. “And I never made a remark asking for support for Woo’s re-election campaign.”

Unlike in other Korean provinces, the mayors of Jeju Island’s two cities, Seogwipo and Jeju, are appointed by the governor rather than elected.

At a Seogwipo High School reunion held in Seoul on Friday, Han asked for support from his fellow alumni to get Won re-elected in the local elections next year.

“There is a regional election coming up in June and my tenure [as mayor] also expires by then,” Han was quoted as saying at the reunion. “I came here [to the reunion] after having made a deal with the governor that he will give me a second term as mayor if he is re-elected. So please help me.”

Han reportedly promised business favors to his fellow alums once he was reappointed as mayor. After his remarks were published, he was fired by the Jeju Provincial Office on Saturday.

During the press conference yesterday, Han claimed his request for help at the reunion was a plea for support for the administrative affairs of Seogwipo, not for votes for the incumbent governor.

The Democratic Party’s Jeju headquarters filed a complaint Monday against the veteran five-term Governor Woo, who is from the ruling Saenuri Party, claiming he violated the Public Official Election Act for making a deal with Han.

Woo was an independent lawmaker for three years after quitting the DP over a sexual harassment conviction. He joined the ruling party last month.

With the submission of the complaint, the Jeju District Prosecutors’ Office began an investigation into the case. The National Election Commission’s Jeju headquarters also launched an investigation.

“It’s been a common practice for elected heads to demand public servants support them in their re-election bids in exchange for promotions, which leaves public servants with very limited options,” said a civil servant of 34 years in North Chungcheong, who asked not to be identified. “So many opt to back the sitting regional head in an election in violation of the political neutrality a public servant should uphold.”