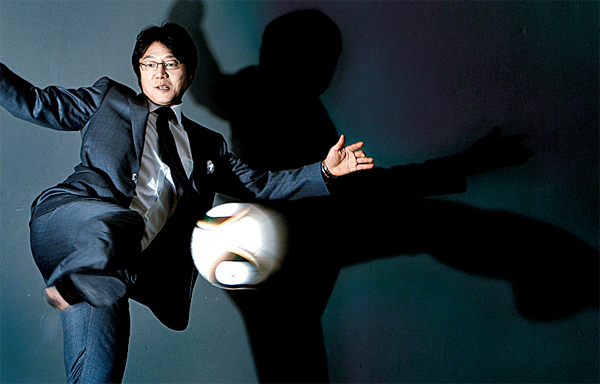 The final round match of the 2013 K-League Classic - when the Pohang Steelers became champions by overpowering the Ulsan Hyundai Tigers - was the most dramatic moment in the history of Korean football. The Tigers were about 20 seconds away from gaining the championship title on their home turf in Ulsan with a draw when the Steelers overpowered them, 1-0, with an added-time goal by defender Kim Won-il in the 95th minute. The win made the Steelers the first club to win two major championships - the league championship and Football Association (FA) Cup titles - in a season in the K-League’s 30-year history. Ilgan Sports, an affiliate of the Korea JoongAng Daily, recently met the team’s coach, Hwang Sun-hong, 45.

Q. How do you feel about winning the league?

A. It feels great, but I don’t really yet feel that we have done such a thing.

The beginning of the season looked tough. The Steelers hadn’t signed any foreign players and contracts with goalkeeper Shin Hwa-yong and midfielder Hwang Jin-sung were made very late.

It really was a crisis for the team, but with a draw against FC Seoul in the season-opening match and a 2-0 victory over the Suwon Bluewings in the third-round match gave confidence to our players. Young players challenged themselves to be included in the lineup and it was kind of lucky for us that we didn’t have any players with long-term injuries.

You won two titles without foreign players. Some say that badly influences other clubs because they would consider not signing foreign players in the future.

Foreign players are necessary, but it doesn’t mean that we should have one. Since a season is a long-term race, foreign players allow coaches to utilize their squads better. Some players can save their stamina and replace those who can’t play due to many potential conditions, like accumulated yellow cards.

In the 39th-round match, the Tigers would have been able to clinch the league if they won the match against Busan IPark, but Busan had a dramatic comeback win. I think that match changed everything.

I actually didn’t watch the match that started 7:30 p.m. on Nov. 27, but when Busan’s Jose Fagner scored the winning goal, I heard the second floor of the team’s lodging, where our players gathered and watched the game on television, getting excited.

Are there any advantages or disadvantages to being a star striker-turned-coach?

Well, I don’t know [laughs]. I think I earned a chance to become a club team coach earlier than others. But I think players listen to me more because I was a star player. Players would laugh at me if I say, “Hey, I never did something like that when I was a player.” They only listen to and react to reasonable advice.

[Hwang was considered the best striker in Korea until the 1990s. He always was the first player to be included on the national football team and played in four World Cup events. He also was a member of Guus Hiddink’s 2002 Korea-Japan World Cup, in which Korea finished in fourth place. Hwang scored Korea’s first goal of the event in the match against Poland that Korea won, 2-0. He scored 50 goals in 103 A-matches.]

Several members of the 2002 World Cup, including you, Hong Myung-bo and Choi Yong-soo, became coaches and are currently leading Korean football.

I think coach Hong will lead the national team well in Brazil. I won this season, but I think I was pretty lucky. Without some luck, you can’t achieve such things. Just like coach Choi of FC Seoul said, winning a title is similar to climbing a mountain. I’ve reached the top. It means that I will climb down someday.

You and Hong seem to be rivals.

I don’t think so. We are just coaches who are trying to improve the level of Korean football. Hong told me to give him advice when he becomes a club team coach sometime in the future. If I get a chance to become the national team coach, I will ask him to give me advice.

You said you want to foster a striker who scores more than 15 goals in a season.

I expected Park Sung-ho to score 15 goals. [Park scored eight goals in 32 games.] But since our “zero top” strategy worked out very well, he got fewer chances to be a starter. I really want to foster a striker who can lead Korean football, but I don’t see many prospects around me.

What do you think the Steelers should do to improve as a team?

We need to be a speedier team. Increasing ball possession is also important, but we need to get faster, especially in counterattack situations. The next goal is to win the Asia Champions League.