Survey finds fewer feel they are in middle class

Survey finds fewer feel they are in middle class 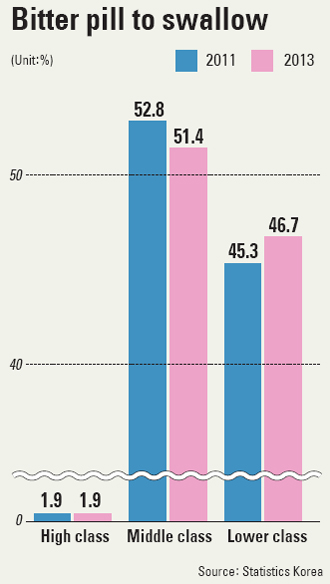 The latest survey by Statistics Korea clearly shows that more people are unhappy about their lives in the first year of the Park Geun-hye administration, which put its top priority on making people happy.

According to a report by Statistics Korea yesterday, the number of people regarding themselves as members of the lower class climbed from 45.3 percent in 2011 to 46.7 percent this year.

The figure for those who think they belong to the middle class slid to 51.4 percent from 52.8 percent during the same period.

The number of people who see themselves as upper class was unchanged at 1.9 percent.

The government’s statistics agency conducts the survey every two years to look into the state of welfare benefits, social participation, cultural and leisure activities, income and consumption patterns, and labor.

As for economic conditions, 40.5 percent said they are suffering economic hardship, up from 38.6 in 2011.

As much as 32 percent of breadwinners who are in their 50s nodded in agreement that their incomes had eroded.

Only 12 percent said they are satisfied with their current amount of income.

More than 30 percent of the respondents in 30s and 40s said they are saddled with more debt than they were a year ago.

But about 40 percent said they have hopes that their children will have a higher status.

The percentage who expect improvement in their living conditions next year dropped from 25 percent to 23.6 percent.

Largely due to the persisting economic slowdown, the portion of Koreans who are preparing for their post-retirement life went downhill remarkably from 75.8 percent to 72.9 percent, data showed.

“It is true that the fact that the number of people who think they are in the low class increased, but it is not too negative,” said Yoon Myung-joon, an official at the agency.

“Since a remarkable percentage of people do believe their children can go up the social ladder, it indicates a brighter future.”