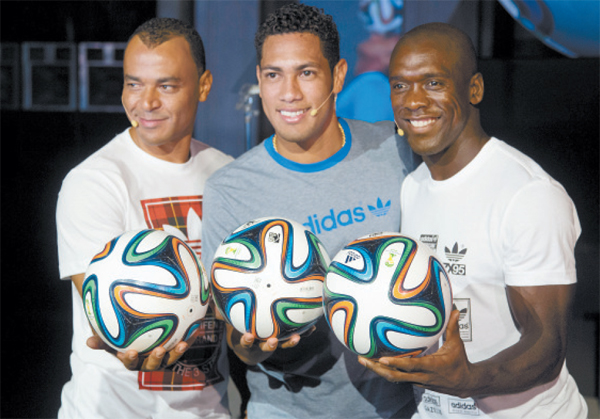 Korea has been included in a World Cup pot with other Asian and American nations for the quadrennial event that will be held in Brazil in June. Korea is in Pot 3 with Japan, Iran and Australia - which are categorized as Asian nations - and the United States, Mexico, Costa Rica and Honduras from North and Central America. The 32 qualifiers will be placed into eight first-round groups of four and the draw will be conducted on Friday in Costa do Sauipe, Brazil.

Pot 1 consists of the eight top seeds, one of each to be drawn in groups A to H. The remaining pots are based on geographical criteria.

Brazil, the host country for the 2014 World Cup, will be allocated position A1 in the draw and will play the opening match in Sao Paulo on June 12.

A pre-draw will be held to move one of the nine European teams into Pot 2. That European team will then be drawn against one of the four seeded South American teams to preserve the geographical balance of the draw.

The four South American seeds of Brazil, Uruguay, Colombia and Argentina will form a temporary Pot X. The three teams not drawn against the European team in Pot 2 will return to the main draw.

Meanwhile, a new ball for next year’s World Cup - called the “Brazuca,” in honor of Brazil, of course - was revealed at a ceremony Tuesday in Rio de Janeiro. The word “Brazuca” has a double meaning; it’s used as a term for Brazilians living abroad - including its many footballers - but also as slang to describe national pride or anything “Brazilianish.”

Manufacturer Adidas said the ball offers “breakthrough innovation,” featuring what it calls a “revolutionary six-panel design.” The ball is decorated with a ribbon design in shades of blue, gold and green, which Adidas said symbolizes the traditional “wish bracelets” worn in Brazil.

The ball makes its formal debut on June 12 in the opening game in Sao Paulo, and will be used until the final on July 13 in Rio de Janeiro.

“The FIFA World Cup match ball is the icon of the tournament as the centerpiece of every goal, every play and every touch,” said Ernesto Bruce, director of football for Adidas America. “Adidas has a rich legacy at the World Cup, providing the official match ball for every tournament since 1970.”

Some World Cup balls are more popular than others, with players often complaining about the feel of a new ball or the way it moves in the air. Goalkeepers often say they have trouble tracking the new models, which seem to move faster at every World Cup tournament.