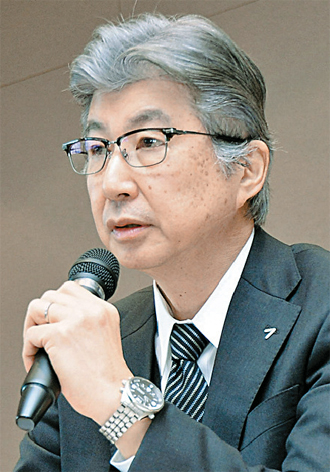 Yamamura Akiyoshi, who spent more than 40 years at Japan’s All Nippon Airways (ANA) as a pilot, safety officer and auditor, began his new job as senior executive vice president of safety and security management at Asiana this week.

It is the first time Asiana has given the top safety job to a foreigner. Akiyoshi, who also worked as a safety auditor for the International Air Transport Association (IATA), said that although there are many differences between Korea and Japan’s airline businesses, safety is the highest priority in any country.

“I assure you that we at Asiana Airlines will continuously improve and enhance our aviation safety by strengthening independent oversight,” Akiyoshi told a press conference at the company’s headquarters in western Seoul. “I will apply the know-how I have acquired during my career in aviation safety at ANA and IATA to identify and mitigate risks and construct an improved systematic safety management suited to Asiana Airlines.”

Akiyoshi said he was positive about working here after experiencing the warm culture of the country as an ANA pilot flying Boeing 767 planes between Korea and Japan.

The 65-year-old is reviewing and analyzing Asiana’s safety management system and hinted there could be some changes. He emphasized that safety is something not only one person or division can achieve, but every team - maintenance and engineering, cabin, airport services and cargo - should be involved.

The Meiji University graduate said he was in Shanghai when Asiana Flight 214 crashed during landing at San Francisco International Airport, resulting in the deaths of three Chinese and injuring more than 180 passengers. Akiyoshi said he felt deeply sorry for the victims and their families.

He declined to comment on the ongoing investigation by the U.S. National Transportation Safety Board, saying he would inspect Asian’s safety system again when the accident report is released. He is scheduled to attend an NTSB hearing on the crash next week in Washington.