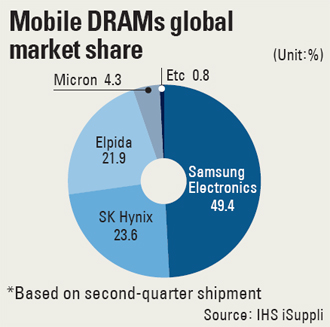 Nearly half the mobile dynamic random-access memory (DRAM) chips shipped in the world are made by Samsung, according to market research firm IHS iSuppli.

The market for DRAMs used for mobile devices such as smartphones, tablet PCs and e-books is growing quickly, with global shipments jumping by 20.7 percent to 2.85 billion chips in the second quarter from the same quarter in 2012, IHS iSuppli said in a recent report.

Samsung churned out 1.41 billion of them, or 49.4 percent, while its Korean rival SK Hynix shipped 675 million, a 23.6 percent market share.

Mobile DRAM chips made up 31 percent of total DRAM shipments in the second quarter, compared to 29 percent in the first quarter.

Samsung Electronics is expected to further bolster its dominance in mobile DRAM chips as it is increasing production. About 42 percent of the DRAMs it manufactured in the first quarter were mobile chips. In the second quarter, it was 49 percent. SK Hynix maintained mobile DRAM production at 24 percent of its total.

Samsung started mass production of 3GB mobile DRAM chips in July, the first company to do so. Many of the smartphones sold this year use 2GB mobile DRAMs.

IHS iSuppli predicted that the global mobile DRAM market will be $9.97 billion this year, up 42 percent from last year, and that it will grow 53 percent next year to $15.3 billion.

The demand for mobile DRAMs is expected to surpass that for DRAMs for PCs as soon as next year.