Pollution from China must be addressed, ministry says

Pollution from China must be addressed, ministry says 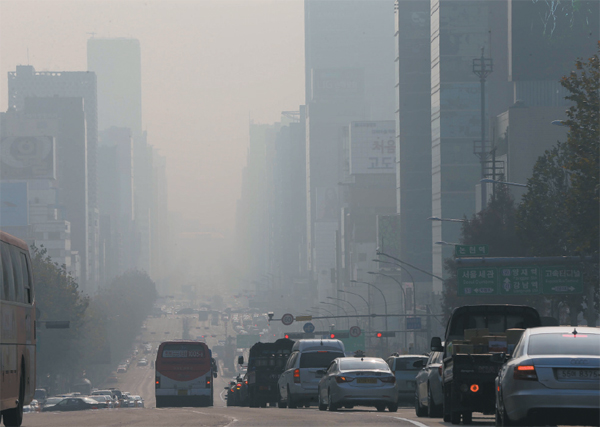 The city was barely visible yesterday under heavy air pollution hanging over Gangnam in southern Seoul. The National Institute of Environmental Research said fine-particle concentrations were higher than normal. By Oh Jong-taek

Fine-particle pollution in Seoul and neighboring Gyeonggi regions reached a high yesterday, with concentration levels two to three times higher than normal, according to the National Institute of Environmental Research.

The environment institute said that such hazardous atmospheric conditions can largely be attributed to a massive amount of fine-particle pollution originating in China.

So it comes as no surprise that Beijing was wrapped in a blanket of smog at the end of last month. From afternoon on Nov. 22 until dawn on Nov. 25, the Chinese capital, like on many days, was choking from its own chronic pollution.

The U.S. Embassy there, through its Twitter account, announced hourly measurements of the fine-particle concentrations in the air; and those figures peaked early Saturday morning, with fine-particle pollution reaching 394 micrograms per cubic meter - about 15 times what the World Health Organization considers safe at 25 micrograms per cubic meter.

But China is not the only one grappling with the pollution problem. Officials at Korea’s Ministry of Environment have long acknowledged that fine-particle matter from China is dirtying the skies of its neighbors to the east. The pollution has been particularly bad in Korea in recent weeks, officials at the Ministry of Environment have acknowledged, which is a cause for concern and further action.

And putting an entirely new perspective on China’s smog problem, the United States has started expressing concern. Authorities there asserted that air composition in California is sometimes affected by fine particles that can be sourced back to Asia, which indicates that pollution from China is as far reaching as America’s West Coast. This fine-particle matter, also known as PM-2.5, is directly emitted from power plants, car exhaust, smoke and industrial gases, and usually contain various chemical elements. They are 2.5 micrometers in diameter or smaller - essentially invisible to the human eye.

More easily inhaled into the lungs than bigger particles, they can have serious health implications and are a major public health threat. This type of smog is particularly heavy in China during the winter months when coal is burned for heating.

From Baeknyeong Island in the Yellow Sea, the institute collects particle matter through filters every week, sending that information to the United States for analysis, where the amount and particular composition can be determined.

The National Aeronautics and Space Administration (NASA) also surveys fine-particle pollution in China through an artificial satellite that it has used since 2008, as well as measuring equipment installed on Baeknyeong Island last year.

But while the United States has ways of accurately sampling and taking measures against pollution both at home and abroad, South Korea - China’s closest neighbor - remains extremely vulnerable to fine particle matter. And efforts to counter the problem have been met with little success.

Right now the government is struggling just to deal with coarse-particle matter - or PM-10 - those particles that are less than 10 micrometers in diameter but too big to be considered fine. It has no way right now of dealing with the smog from China, and the Environment Ministry has never even made public its measurements of PM-2.5 concentrations because it says its data is unreliable.

“The conditions around the 165 automatic measuring centers [nationwide] have some discrepancies, so it is difficult for us to use the data directly,” said Chung Bok-young, an official in charge of climate and air policy at the Environment Ministry. “We had to adjust the figures by comparing them with manual measurements using filters.”

In August, the Environment Ministry and the National Institute of Environmental Research established the current public warning system in place for the capital region, which includes Seoul, Incheon and Gyeonggi - a wide swath.

Pollution measurements and forecasts are taken for each city and province every day, but since the system is still running as a pilot program of sorts, public warnings are only issued if the average concentration of PM-10 particles for the capital region exceeds safety standards. Data for fine-particle PM-2.5 concentrations is out of the question.

The current system was supposed to be expanded nationwide this month, but ministry and institute officials pushed back the date, claiming they weren’t yet prepared for such a shift.

One of the biggest issues is that public warnings have been issued sporadically or not at all, and inaccurate or misleading forecasts for some areas have also made the system less reliable.

However, despite its problems, which authorities have acknowledged, environment officials are still hopeful that the situation can be improved.

The ministry is optimistic that it can start a pilot program by next May that would issue a fine-particle pollution warning for the capital region.

It further projected that a trial forecast system for PM-2.5 pollution could be expanded to other parts of the country by August 214, with a fully operational system starting in January 2015.

The Environment Ministry also said it would start consistently announcing PM-2.5 measurements beginning in 2015. Unfortunately, that plan may be too ambitious. Right now, no earmarks for next year’s budget currently exist for such a project.

“If you look at the budget plan for the Ministry of Environment and the National Institute of Environmental Research for next year, 1.7 billion won [$1.6 million] was earmarked for establishing and operating the PM-10 forecast system,” said Saenuri Party Representative Kim Sung-tae, who is a member of the National Assembly’s Environment and Labor Committee. “There is no budget for PM-2.5 measurements and forecasts.”

Experts insist that in lieu of a plan to combat smog from China, the government must act fast to come up with measures to reduce the PM-2.5 pollution generated domestically.

“[Fine particles] can lodge deeply into the lungs, reaching to alveoli,” Kwon said. “They also contain large amounts of heavy metals and toxic chemicals, so they are far more dangerous. The government has been satisfied with the improvements in PM-10 pollution, so it has failed so far to pay proper attention to PM-2.5 pollution.”

While the Environment Ministry has struggled to quickly address the situation, the Seoul Metropolitan Government decided to take the matter into its own hands.

Last year, it began providing its own PM-2.5 pollution data through its website. The city has various centers spread out across each district, where measurements are made and forecast. The idea is that, regardless of the reliability of the numbers, the public should be informed.

The city added that it has also begun issuing pollution warnings through text messages and electronic sign markers on the street when the hourly average concentration of PM-2.5 exceeded 60 micrograms per cubic meter for more than two hours.

Meanwhile, in China, small steps have been made to make public fine-particle pollution forecasts accessible. However, the country still has a long way to go to combat the problem.

These announcements prompted an angry outburst from the Chinese government in June 2012, though it ultimately pushed the administration to come up with better measures to reduce particle pollutants.

Since October 2012, the Chinese government has provided real-time measurements of PM-2.5 concentrations in major cities on the Ministry of Environmental Protection’s home page.