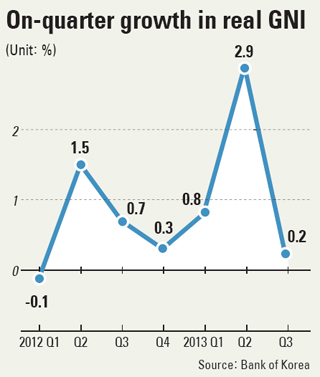 The Korean economy is growing in terms of size, but the gross national income has slowed, signaling weak internal growth.

According to the Bank of Korea yesterday, the nation’s real GNI rose 0.2 percent in the third quarter compared to the previous quarter, the smallest growth in the past six quarters.

Gross domestic product expanded 1.1 percent during the same period. Compared to the third quarter of last year, the GDP increased 3.3 percent, surpassing the 3 percent mark for the first time in seven quarters.

The real GNI, after posting a minus 0.1 percent in quarterly growth in the first quarter of last year, recovered to reach 2.9 percent in the second quarter.

Since the indicator is a gauge of consumers’ purchasing power, the latest slowdown indicates that domestic consumption is at risk.

The central bank attributes the fall to increased import prices of commodities and decreased profits of Korean businesses abroad. Crude oil prices rose 5.5 percent in the past quarter compared to Q2.

Korean businesses or individuals earned 700 billion won ($660 million) in overseas markets in the third quarter, down from 1.6 trillion won in the second quarter.

“It’s only because overseas conditions slightly worsened in the third quarter compared to the second quarter,” said Jung Young-taek, director at the central bank. “Year-on-year, conditions and the index has improved.”

From a year earlier, the real GNI rose 4.1 percent, the official said.

“If the economy grows 0.8 percent at least in the fourth quarter, it will be possible the country will reach its goal of 2.8 percent growth this year,” Jung said.