Kimchi and kimjang are recognized by Unesco

Kimchi and kimjang are recognized by Unesco 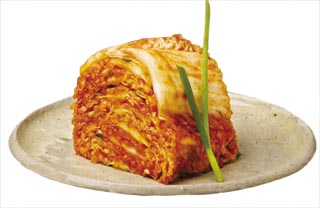 Kimchi, the spicy, fermented vegetable dish that Korea is famous for, and kimjang, the culture of making and sharing the dish, have become recognized world treasures.

The decision was made at a meeting of Unesco’s Intergovernmental Committee for the Safeguarding of the Intangible Cultural Heritage, held from Dec. 2 to 7 in Baku, Azerbaijan.

“The committee members recognized that kimjang - which has been handed down for generations in Korean homes - represents Korea’s culture of sharing and networking ahead of winter and gives Koreans a sense of identity and belongingness through bonding and solidarity,” the CHA said in a statement.

Kimjang usually takes place between November and December and has been a way of preparing and storing nutritious vegetables for use during the long, harsh winters. Today, fresh vegetables can be bought at any time of the year, and there are plenty of vegetables to choose from beyond the cabbage or radish used in the most basic types of kimchi.

But Koreans stick to the long tradition of kimjang, even in smaller, non-nuclear families.

The ritual has also been modernized with the advent of the kimchi refrigerator. According to a 2012 survey conducted by the CHA, 90 percent of Koreans still carried on the tradition every year. Experts say kimjang was just one of many winter rituals of ancient Koreans, which also included renewing roofs on thatched houses and preparing firewood. While several of those rituals have disappeared, kimjang survived because Koreans still love their kimchi.

Joo Young-ha, a professor of folklore at the Academy of Korean Studies, is an expert on kimchi and has authored several books on the dish. “An average Korean meal consists of a bowl of rice, soup, side dishes and kimchi,” he said. “And that has been the case for as long as we can remember.”

Korea now has 16 items on Unesco’s list of intangible heritage items, including a royal ancestral ritual in the Jongmyo Shrine and its music (added in 2001); the pansori epic chant (2003); the traditional dance ganggangsullae (2009); jultagi, or tightrope walking (2011); and the lyrical folk song “Arirang” (2012).

“We believe the recognition will help the world reaffirm Korea’s [emphasis on its culture],” the CHA said in a statement jointly drawn up with the Ministry of Foreign Affairs. “We will work to further expand and hand down the kimjang culture.”

The committee, which seeks to promote the transmission of intangible heritage items and values to future generations, meets every year to decide on items proposed by member countries.