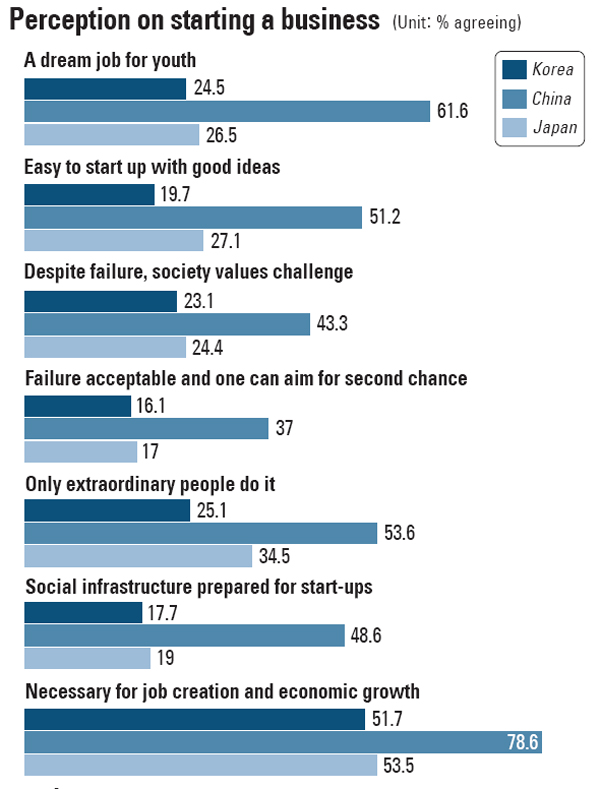 A 17-year-old student surnamed Kim was recently scolded by a number of teachers when he entered the administration office to submit an absence request form to participate in a youth start-up mentoring camp.

Kim, who hopes to start a fashion business after graduation, was told by his teachers that entering university is the easiest way to be successful in life.

Ever since, he decided not to tell anyone about his dream. Instead, he secretly attends training courses after school.

“I didn’t even tell my parents about my dream job out of fear that they would also try to persuade me that academic success is best,” Kim said. “Bill Gates began a start-up when he was in high school, and if he were in a country like Korea, he wouldn’t have been able to succeed.” 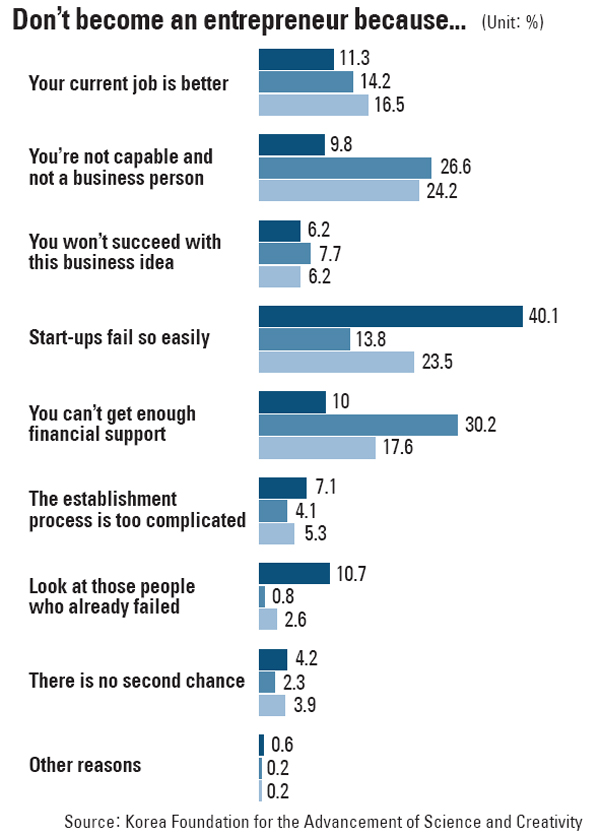 Despite the Park Geun-hye administration’s efforts to boost start-ups and encourage young people to start their own businesses, a survey released Wednesday showed the social environment makes them feel reluctant, compared to Japanese and Chinese, to start their own ventures.

According to the survey conducted by the Korea Foundation for the Advancement of Science and Creativity of 1,000 people in each of the three countries, 72.6 percent of Koreans surveyed said it would not be right to begin a start-up and that starting one should be carefully considered.

The survey showed, however, that Japanese (55 percent) and Chinese (40.8 percent) were more willing and open to starting their own businesses.

When thinking of start-ups, the survey also showed Koreans think of negative words like “failure” or “risk.”

“People oftentimes criticize it as a childish and unrealistic challenge,” said Kim Nam-kyung, president of the Korea Youth Start-up Association. “That kind of perspective discourages innovation and risk-taking.”

Universities today are mostly regarded as commercial centers to prepare students for employment. It’s often the case that students receive job training or get involved in group studies and obtain various credentials.

Public corporations are one of the most popular destinations for students as they offer stability.

A student surnamed Kwon who goes to Korea University established a start-up that develops applications for mobile phones last year. It was a joint venture with friends from a start-up club at school.

However, he is now back to the life of an ordinary student in Korea. He is into studying English and general knowledge to prepare for job interviews. His friends from the start-up group also decided to focus on preparing for the upcoming hiring season.

Kwon said he is reluctant to try another start-up.

“Students nowadays seem to join a start-up club just to add a line to their resumes,” said Hong Kug-sun, a materials science and engineering professor at Seoul National University. “And then they quit after awhile. This somewhat discourages other students that have joined the club out of a sincere interest.”

It’s not only university students who are afraid of beginning their own start-ups.

It is also difficult for office workers to imagine leaving their jobs to pursue dreams that might fail. People involved say there’s a lack of institutional support from the government. Some of them joke that they may end up being “homeless” if they fail.

Unlike in Korea, the survey showed public sentiment about start-ups is quite positive in China.

In late November, Cheku Cafe in Beijing was packed with aspiring entrepreneurs discuss their business ideas.

A Beijing University graduate surnamed Li said it is the second try on his start-up developing mobile applications that purchase products on behalf of the users.

His first business failed because he was limited to domestically produced goods. Now, he plans to expand the service so users can purchase goods from overseas.

Li said he is still unsure if he can succeed, but he sees failures as learning opportunities.

“For Chinese people, it is common to dream about becoming an entrepreneur since many owners of start-ups become billionaires,” said Zhang Rui, chief executive of Social Touch, a Chinese social networking service. “Chinese in the past had considered working for the government as the best career, but now start-ups are gaining increasing popularity with a growing number of top-tier college graduates.”

Many experts in Korea also note the importance of education on entrepreneurship. They say the current education system in Korea is focused on subjects like Korean language, English and math. Instead, they say there should be a culture where creativity is valued by others.

More middle and high school students also should also adopt the so-called youth entrepreneurship program as a curriculum. Only 124 schools nationwide ran the program as of 2012.

“Are there Korean children who say their dream is to become an entrepreneur?” asked Ko Young-ha, president of the Korea Business Angels Association. “In advanced countries, people dream about becoming one at a very young age. There should be an educational system like in the United States and Europe where schools offer curriculums to students on building an entrepreneurial mind.”