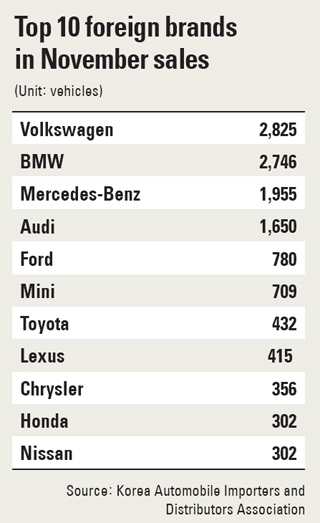 It was the second time this year that Volkswagen topped monthly sales after doing so in September. Although the overall sales king remains BMW, which sold 30,773 cars this year through November, Volkswagen has supplanted Mercedes-Benz as the No. 2 seller.

The Wolfsburg-based automaker sold 24,226 vehicles from January through November, a 45.8 percent year-on-year increase that far exceeded the industry average of 20 percent. Of the top 10 best-selling models this year, Volkswagen has three, with the compact SUV Tiguan 2.0 TDI Bluemotion in second place behind the BMW 520d.

Last month, the Tiguan 2.0 TDI Bluemotion and Passat 2.0 TDI midsize sedan were the top two sellers, while the Golf 2.0 TDI and Jetta 2.0 TDI also made it into the top 10.

Industry observers say Volkswagen models are gaining popularity because most of their diesels have high fuel efficiency and cheaper prices compared to other German premium brands.

The data from Kaida shows that 65.3 percent of foreign cars sold this year have been diesels, up 9.4 percentage points from last year.

The Kaida data shows nearly 60 percent of imported cars this year were bought by private individuals, while corporate customers have decreased.

Thomas Kuehl, who heads Volkswagen Korea, said at a recent press briefing that the company will put more effort into a customer-centric brand here, such as increasing the number of service centers and bringing in more cost-efficient products. The goal is for Korea to become one of Volkswagen’s top 15 markets, he said.

Meanwhile, Kaida said overall imported car sales in November were 13,853 units, up 11.1 percent from a year ago, but off 2.1 percent from the previous month.

“Despite some brands’ release of new models, November sales have decreased slightly from October because some brands still haven’t secured enough volume to supply cars to customers,” said Yoon Dae-sung, an executive managing director from Kaida.

Although the growth of imports seems to be slowing a bit, foreign brands are still doing better than local car makers that have been struggling all year. Combined domestic sales for the five Korean car makers last month was 119,195 units, down 7.9 percent from a year ago.