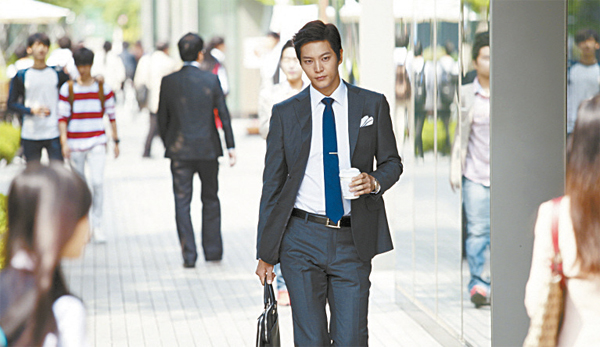 Just in time for the Christmas holidays, two of Hallyu’s biggest names, Joo Won and Kim Ah-joong, are set to treat their fans by taking on their sexiest roles yet in “Steal My Heart.” Directed by Lee Hyun-jong, the film portrays Joo, who plays the handsome police profiler Tae-ho with enough charisma to make any criminal swoon. Then there’s Kim as vixen burglar Jin-sook - who goes by Sook-ja - who can just as easily swipe a security badge from a guard as she can scale a high-rise building to steal expensive artwork, all without a trace.

But because one kink is never enough in a rom-com, another twist is thrown into the bag for good measure - in this case, history. So the cop-thief duo apparently were each other’s first loves more than 10 years ago after a meet cute on the bus.

With character descriptions like these, the plot practically writes itself. But even so, there is no originality and it seems the writers were just banking on the fame of Joo and Kim to carry the film.

True to the rom-com formula, the two have not seen each other since a confusing breakup that forever shaped their lives (mostly their career paths).

But as luck would have it, the former sweethearts are given one more chance to rekindle the fire, complete with handcuffs in the mix. Jin-sook, remembered by Tae-ho as Sook-ja, is found out by the police one day when she runs over a criminal that was on the run. But it seems Jin-sook has some skeletons in her closet and the police begin investigating.

When Tae-ho is sent to arrest Jin-sook, they have a predictable reunion. Later, Tae-ho has a change of heart and hides Jin-sook at his own place while he figures out a way to let her go, at least physically.

With each scene it becomes more evident that this is just a sappy rom-com with not a trace of interesting or smart developments.

And underneath all that fluff about Tae-ho’s impressive career (a 100 percent success rate in tracking down suspects), and Jin-sook’s loot of expensive artworks, it is another quintessentially sappy tale about first love. There is nothing about Tae-ho and Jin-sook’s past or present chemistry that truly convinces you that they are “special.” And once they find a way to save Jin-sook from her predicament, you have to try hard to stifle a laugh. For most of the film, you just find yourself going along with the ludicrousness of it all, because what else are you going to do?

Even the lovers’ quarrels, which often make up for the lack of chemistry, are painful to watch.

Words, nay sounds, that Joo utters the most in the film are something akin to “uggghh,” as he beats his head furiously into a couch, bed or something similar, constantly angered by the naivety of his lady love. And for her part, Kim attempts to generate laughs, nearly burning down the house trying to cook. Oh, and someone’s crotch is also set on fire in the process.

This portrayal of Jin-sook by Kim as a sort of helpless damsel in distress at home is hard to swallow, given that she is supposed to be such a professional on the job.

By the end of the awkward bed scene, fights - and yes - even a couple shirt that somehow gets incorporated into a house arrest, this film marks itself as just a romance, despite the fact that the marketers pushed for the film to be promoted as an “absolute crime romance.”

It is reminiscent of the summer Korean film “The Spy,” and every other rom-com brought to you by K-cinema. And while Cha Tae-hyun’s cameo might bring a genuine laugh, not much else will.

The film opens later this month.