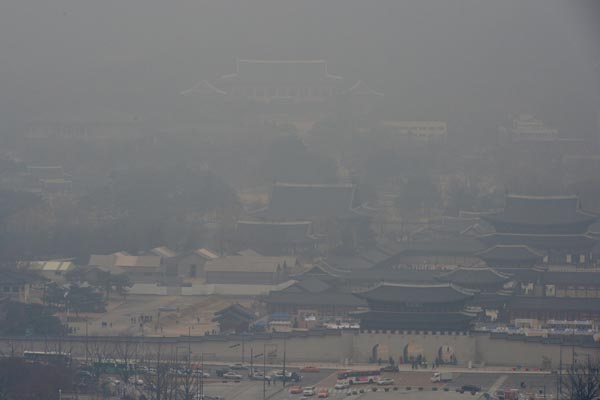 For the very first time, the Seoul Metropolitan Government yesterday issued a fine-particle pollution warning after wet clouds with gunk from China settled over the city.

As of 4 p.m. yesterday, all districts in Seoul had levels of fine-particle concentration reaching above 100 micrograms per cubic meter, with some going beyond 200. The warning was issued at 4 p.m.

The air in the capital region has been getting worse since Dec. 2, largely due to pollution blowing in from China.

The National Institute of Environmental Research, which is under the Environment Ministry, strongly advises people, especially those aged 65 and older, to stay indoors when the fine-particle pollution level exceeds 200 micrograms per cubic meter.

Air pollution, or particle pollution, is produced when moisture in the air is combined with fine-particle matter. Particles less than 10 micrometers in diameter - known as PM-10, which is about one-seventh the width of a single human hair - are small enough to be inhaled into the lungs. This type of pollution can also contain other elements like smoke, nitrates, dirt or metals, and make the air appear hazy.

According to the National Institute of Environmental Research, Korea is being hit by a massive amount of fine-particle pollution from China. Winds run from west to east in fall and wintertime.

The state-run Health Insurance Review and Assessment Service released a study yesterday showing 1.6 times more people are troubled by asthma in December than in the summer months because of colder temperatures and worse air pollution.

According to the study, the average number of people diagnosed with asthma in December between 2008 and 2012 is 445,840, while the figure in June over the same time period stands at 278,448.