GM to pull Chevrolets from Europe

GM to pull Chevrolets from Europe 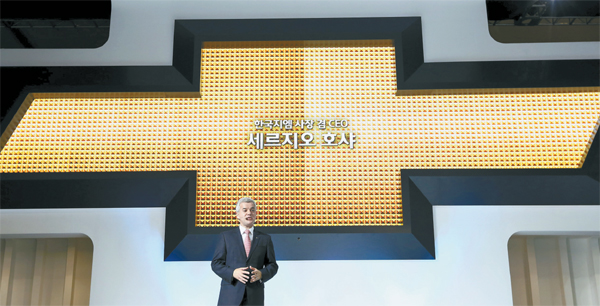 Sergio Rocha, GM Korea President and CEO, gives a speech during the Busan International Motor Show held in May 2012. [BLOOMBERG]

Concern is rising over GM Korea after General Motors decided to pull the Chevrolet brand from Europe.

The United States-based automotive group Thursday announced that, beginning in 2016, it will compete in Europe with its respected Opel and Vauxhall brands and that its Chevrolet brand will no longer have a mainstream presence. The company blamed the difficult economic situation in Europe.

“Europe is a key region for GM that will benefit from a stronger Opel and Vauxhall and further emphasis on Cadillac,” GM Chairman and CEO Dan Akerson said in a release. “For Chevrolet, it will allow us to focus our investments where the opportunity for growth is greatest.”

Relaunched in Europe in 2005, Chevrolet was supposed to compete at the budget end of the market with the likes of Volkswagen’s Skoda, Renault’s Dacia, and Korea’s Hyundai and Kia.

Although the decision will cost GM up to as much as $1 billion, Akerson said it will eventually benefit the group’s production, marketing and distribution in the region.

“This is a win for all four brands,” Akerson added. “It’s especially positive for car buyers throughout Europe who will be able to purchase vehicles from well-defined, vibrant GM brands.”

GM said Chevrolet, the fourth-largest global brand, will be tailored toward offering select, iconic vehicles like the Corvette in Western and Eastern Europe, and will continue to have a broad presence in Russia and the Commonwealth of Independent States (CIS).

The automaker added that the decision will boost the Opel and Vauxhall brands and reduce the confusion of having Opel and Chevrolet in Western and Eastern Europe. In Russia and the CIS, the brands are clearly defined and, as a result, are more competitive within their respective segments. 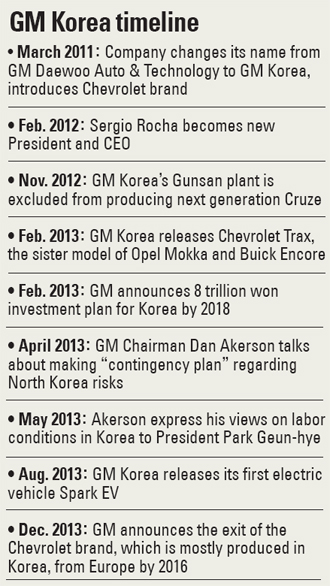 Chevrolet brand executives said that they will work closely with their dealer network in Western and Eastern Europe to define future steps.

“Our customers can rest assured that we will continue to provide warranty, parts and services for their Chevrolet vehicles and for vehicles purchased between now and the end of 2015,” said Thomas Sedran, president and managing director of Chevrolet Europe.

The decision is a blow to GM Korea, the nation’s third-largest automaker, because nearly 90 percent of the Chevrolet portfolio sold in Western and Eastern Europe is produced by the company.

GM Korea shipped 186,000 vehicles to Europe last year, which accounted for 28.5 percent of its total exports.

Industry analysts point out that GM Korea’s plant in Gunsan, North Jeolla, which produces most of the company’s European exports, will face a tough situation. According to the company, the operation rate of the Gunsan plant, which has already been hit by GM’s decision to exclude the plant from producing the next-generation compact sedan Cruze, has been only 60 percent in recent months.

Even before GM’s announcement, IHS Automotive, the industry research group, said in a recent report that GM Korea’s production volume will be cut by nearly 20 percent in 2015 compared to this year, with rising concerns about wage costs and labor conditions.

According to Reuters, IHS Automotive speculated that GM Korea could produce 650,000 vehicles in 2015 compared with 800,000 vehicles this year, expecting that GM could move a large portion of the production of its compact sport-utility vehicle Chevrolet Trax - which is sold as Opel Mokka in Europe - to Spain starting next year. It is also expected to stop producing the Gentra along with the Damas and Labo, two small commercial vehicles, in Korea by the end of this year.

This year is following a similar trend. So far, GM Korea saw its domestic sales increase 1.3 percent from a year ago, but overseas sales fell 2.9 percent year-on-year.

GM, the world’s second-largest automaker behind Toyota last year, said it will increase its focus on profitability, managing costs and maximizing sales opportunities for GM Korea, as the company looks for new ways to improve business results in the fast-changing and highly competitive global business environment.

“We will continue to become more competitive in Korea,” GM Korea President and CEO Sergio Rocha said in a release. “In doing so, we will position ourselves for long-term competitiveness and sustainability in the best interests of our employees, customers and stakeholders, while remaining a significant contributor to GM’s global business.”

GM Korea denied that the pulling of the Chevrolet brand from Europe was a sign that the U.S. auto giant may leave Korea, the world’s fifth-largest automobile producer. It said GM earlier this year pledged to invest 8 trillion won ($7.3 billion) in its Korean unit over the next five years.