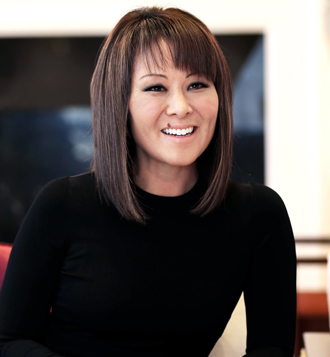 Before returning to the United States on Nov. 30, Alina Cho visited the demilitarized zone, affirming that she is still interested in inter-Korean relations despite her turn to fashion. By Choi Seung-shik

After a decade of reporting for CNN, one of the world’s most well-known news organizations, Alina Cho was ready for something else.

An American journalist born to Korean parents, Cho, 42, resigned from her post in September to pursue a career in fashion, her life-long dream.

“I still love the news,” she said. “But fashion is something I dreamed about long before journalism, and I think now is the time.”

In an exclusive interview with the JoongAng Ilbo on Nov. 28 at Seoul’s Hilton Hotel in Jung District, central Seoul, Cho looked back on her successful media career and offered some clues for the next chapter in life.

Born in Vancouver, Washington, Cho said her high school speech teacher - who admired her tone of voice and presentation skills - initially inspired her to want to work in broadcast news. She went on to major in journalism at Boston College and then at Northwestern University in Evanston, Illinois.

After graduating, Cho’s began her professional career as a morning reporter at Chicagoland Television, presenting the weekend news. From there, she worked her way up a number of different organizations, including WFTS, CNBC, ABC News and then CNN.

“My turning point was anchoring for CNBC, which at the time was a very small broadcaster,” Cho said. “Together we grew, and the experience opened the door for new opportunities.”

A reporter of Korean descent, Cho said she had not experienced discrimination in the news business but, rather, had been “privileged.”

“I got the OK to accompany the New York Philharmonic on their trip to Pyongyang in 2008,” she explained.

Cho personally met the president of CNN and explained how her family had been separated during the 1950-53 Korean War.

The trip, she insisted, “would have been impossible had I not been a Korean.”

Now, with her microphone set aside, Cho is busy working on an ambitious personal plan, though she added that it is too soon to elaborate on what it is.

“It could be running my own fashion show, or contributing articles to a magazine,” she hinted. “I’m just letting ideas fly by for now.”

When asked to give a word of advice to Korean women, Cho replied, “Dream big; it’s the only way to reach the top.”