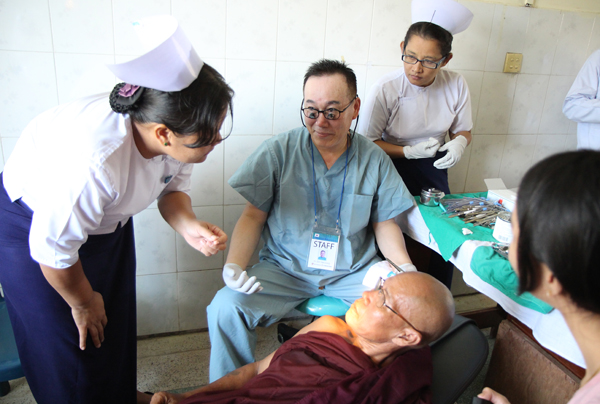 YANGON, Myanmar - When a tour bus carrying 20 Korean medical practitioners arrived at a public health center in the East Dagon Township of Yangon, a long line was waiting for them

“We usually have 30 to 40 persons here, but today a total of 400 waited in line to see Korean doctors and nurses from very early in the morning,” said Saw Sein Min, director of the health center.

Among them was 18-year-old Susu Kain, who walked for two hours from her house. The girl was born with a lump on her back and she frequently suffered from infections around it. At one point, it hurt so much she couldn’t sleep. The excruciating pain led her to visit the health center earlier, but she couldn’t receive surgical treatment due to lack of expertise at the regional facility.

It took 30 minutes for Dr. Yoo Seok-jin to surgically remove the lump. After the operation, she repeated “thank you” time and time again. The Korean team of specialists in internal medicine, dermatology, surgery, dentistry, Oriental medicine and pharmaceuticals offered free treatment to as many as 1,000 people over two days.

Some Burmese had particularly high hopes for Korean medical techniques largely because of the mounting popularity of Korean dramas.

Duhnin, a 60-year-old woman who had an Oriental medicine treatment, said, “The needle was very scary, but I took it because I believe in Korean doctors.”

The volunteer work was also recognized by local politicians who visited the clinic. Myanmar strictly regulates health care from outside the country, so it is a rare exception for the Korean team’s visit to receive government approval.

The process was aided by the Korea Tourism Organization and Gyobo Construction, which does business in Myanmar.

The initiative, which is intended to help patients in Myanmar and spread Korean medicine, is in its third year.

“We opted for on-the-spot service instead of campaigns primarily targeted to the well-off in an effort to raise the status of Korean medicine,” said Choi, a physician and president of the association.