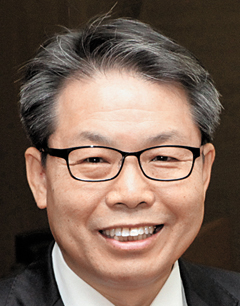 Infomercials are pretty standard on most channels these days, but it didn’t always used to be that way. Longer than the average commercial, some can last as long as eight minutes.

They’re commonplace in other developed nations like the United States, but they only started to surface here as late as 2008. And probably the biggest pioneer of the Korean infomercial is Shim Beom-seop, the founder of Infobell.

The 55-year-old is well known in the advertising industry. He was a star executive in the commercial market, integral in creating some of the most popular ads on TV.

Now Shim is responsible for more than 20 percent of the infomercials aired on TV, and he’s confident that the market will only continue to expand thanks to an influx of new channels and outlets. “Thanks to the multiple channels available, the infomercial market is growing at an alarming rate,” he said. “This year we estimate the market to be worth approximately 400 billion won ($380 million), and to expand to more than 600 billion won next year.”

Shim started his career in the industry in 1982, when he was hired by Cheil, Samsung Group’s advertising house. With a number of hit commercials, his rise was quick.

Perhaps the most notable of Shim’s commercials was his campaign between 1987-90 for Dashida, an instant beef soup stock. In 1997, he abruptly stepped out of the limelight, leaving Cheil for a new challenge.

But life wasn’t always so easy.

“I lost a huge investment in a game company and had a really hard time for about 10 years,” Shim said. “Then one day, sort of by accident, I began to think about starting an advertising company that not only distributed products but also explained what the product was and how to use it.”

So in 2007 he opened up shop, placing a single desk in a friend’s office. Started from humble beginnings, Infobell now holds the No.1 spot in the infomercial market, bringing in about 38 billion won annually in revenue.

“An advertisement that promotes a luxurious image is reserved for winners,” Shim said, “while small and midsize companies struggling from a bad economy generally prefer infomercials, which can immediately boost their sales figures.”

But making an infomercial isn’t as easy as it sounds. The ad’s success is vital, with total earnings tied to product sales. So to help boost figures, Shim sometimes gets personally involved in product development.

But Shim affirmed that there is still room for infomercials to evolve. “It has always been my ambition to create [advertisements] with interesting story lines,” he said, “to squash the myth that infomercials are tasteless and cheap.”