The success of a 2nd-generation Korean in Berlin

The success of a 2nd-generation Korean in Berlin 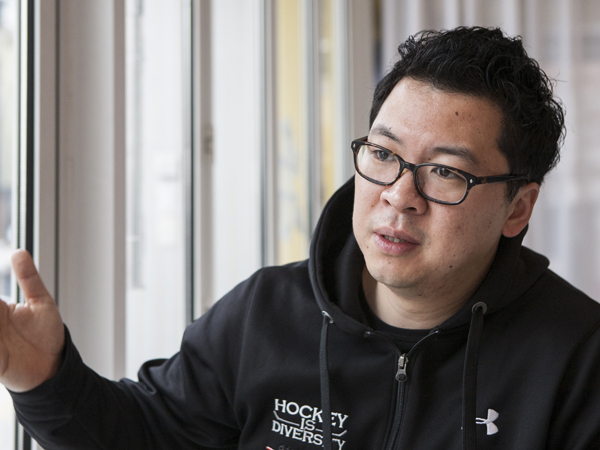 All his life, Martin Hyun has lived in Germany. But he still feels like an outcast.

Born to Korean parents, his family flew halfway around the world nearly five decades ago as part of an intergovernmental recruitment program that placed locals in various manual labor industries in host countries after the devastating 1950-53 Korean War.

Hyun, currently residing in Berlin, said he feels his heart belongs in Korea.

“I felt like I was home when I first visited [South Korea] in 2002,” he said. “People were not looking at me as if I were the Eiffel Tower of Paris.”

Dec. 16 marks the 50th anniversary of the Korean temporary employment program, which dispatched 8,000 Korean miners to Germany and, later, 11,000 nurses in a similar pact. A commemorative symposium was held on Dec. 4 at the Goethe-Institut, the German culture center, in Yongsan District, central Seoul.

Hyun, 34, whose Korean name is Hyun Jong-bum, participated in the ceremony, which was, in part, an acknowledgement of his status as one of the most successful second-generation Koreans living in Germany.

He was brought into the media spotlight in 2004, when he became the first Asian to play in the Deutsche Eishockey Liga, Germany’s professional ice hockey league, as a right-wing forward. But now, with his skates taken off, he’s researching Korean immigration at the University of Bonn.

“I started out with a sense that I needed to compensate my parents,” he said, explaining how he chose his research subject. “I was completely ignorant to the ordeal my parents had to go through after arriving in an unfamiliar country. Over the course of interviewing them several times for my paper, I have come to realize how well they pulled through.”

After years of study, Hyun reached the conclusion that Germany - despite being inhabited by more than 15 million immigrants - still treasures “blood and soil.” While Hyun is a German national, he said that as an ethnic Korean, he is still considered an “outsider.”

In his book, “Silence ? Yes, Speechless ? No,” Hyun further explains that “first-generation Koreans in Germany, unable to speak the native language, had no other choice but to immerse themselves in their work.”

But second-generation Koreans, despite being equipped with the right communication skills, do not speak out, he wrote, and are therefore depicted as “silent immigrants.”

The book was published only in the German language because “unfortunately, there was no interest from a Korean publishing company on that issue and to translate it.” Hyun deplored that Korea sets much more emphasis on America than Germany.

And some fault for shaping these “silent immigrants” lies with the Korean government, Hyun stressed, because it has not shown concern for its countrymen living abroad.

When Turkey commemorated the 50th anniversary of its own workers’ dispatch agreement, the Turkish president made a state visit to Korea, Hyun explained.

The 3 million Turks living in Germany “consistently gain ground by intervening in [German] politics,” he said.

In reflection of German multiculturalism, he advised Korea to think back on its immigration history and try to understand that, for some, exploring a new world was necessary.

“As the old German proverb goes, ‘Only one who knows the past will not go blindly towards the future,’?” Hyun said, underlining that tears shed by Koreans who went abroad realized the Miracle on the Han River, Seoul’s postwar rapid economic growth.