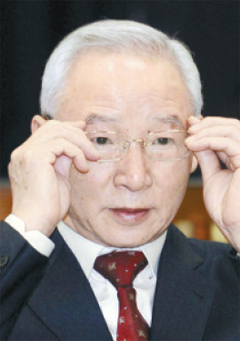 To bring some clarity, the chief of the National Intelligence Service yesterday explained to a National Assembly committee what led the spy agency to conclude he had been removed from power.

And NIS chief Nam Jae-joon said the agency had no information on a report by cable news network YTN and daily newspaper Munhwa Ilbo that a close aide of Jang fled to China and sought asylum two months ago in fear of the coming purge, according to a lawmaker.

Nam briefed the Intelligence Committee at the National Assembly yesterday, and after the briefing Jung Chung-rae, a Democratic lawmaker on the committee, said some 40 people had been publicly executed in North Korea so far this year, a jump from last year’s 17, according to NIS reports.

This was considered a sign of the attempts by leader Kim Jong-un to consolidate his power.

Lawmaker Jung first revealed the alleged purging of Jang to reporters on Dec. 3. He also described the reasons why the NIS believed the purge.

In late November, two close associates of Jang - Ri Ryong-ha and Jang Su-gil - were publicly executed in front of spectators.

The lawmaker said this signifies that the executions were carried out in accordance with North Korea’s own procedural or judicial processes and not done in secret.

Ri, 66, was born in North Hwanghae Province and worked as a party secretary in his hometown in 2003. In 2009, Ri was promoted to first deputy director of the ruling party’s administrative department. The age and hometown of Jang, a deputy director of the administrative department, are unknown. He was appointed lieutenant general in February at an event to mark the 70th anniversary of the birthday of former leader Kim Jong-il.

In a chain of incidents that supports the purge, Jang Song-thaek’s brother-in-law and nephew, who serve as foreign ambassadors, were summoned back to North Korea, Jung confirmed, referring to Jon Yong-jin, Pyongyang’s ambassador to Cuba and Jang Yong-chol, ambassador to Malaysia. Jon is Jang’s brother-in-law, while Jang is his nephew.

For now, most of evidence of Jang’s purge is circumstantial and based on information offered by the NIS.

The NIS considers Jang’s dismissal as a nearly established fact, but the ministries of National Defense, Foreign Affairs and Unification are taking a more cautious approach.

Meanwhile, the JoongAng Ilbo reported that Jang is staying in the central area of Pyongyang called Changgwangsan District.

“While Jang Song-thaek is staying at his house, he is writing letters of apology to Kim Jong-un daily,” said a diplomatic source who is familiar with North Korea.

“He appears to be undergoing a punishment to take responsibility for the alleged crimes of Ri, his close aide,” the source said. “A situation that forces him to submit apology letters to his young nephew is quite harsh.”

The source said that Kim Kyong-hui, Jang’s wife and the younger sister of former leader Kim Jong-il, is staying with Jang. The presence of Kim Kyong-hui indicates that Kim Jong-un will not be able to take further steps to punish his uncle.

“As long as Kim Kyong-hui survives, no one would, at least physically, hurt Jang Song-thaek,” the source said.

It’s still not clear whether Jang’s situation is temporary or permanent, the source said, but the central leadership structure of North Korea’s ruling party is now “unstable and gets paralyzed,” he said.

Some analysts that young leader Kim is eliminating potential threats from an older generation and replacing them with officials who will owe their promotions to the new leader. But a purge for corrupt acts can also not be ruled out.