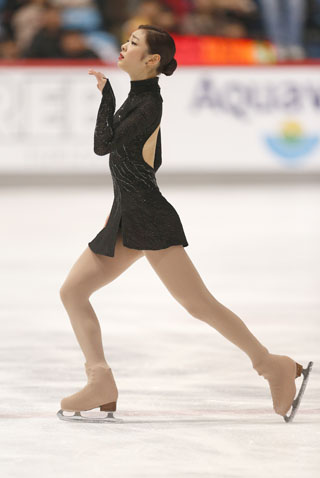 South Korea’s Kim Yu-na performs in the free skate at the Golden Spin figure skating competition in Croatia on Saturday. Kim won the event with a total score of 204.49 points, raising her hopes of winning gold in the 2014 Sochi Winter Olympics in February. [AP/NEWSIS]

Despite a fall, figure skater Kim Yu-na of Korea won her first event of the season in Croatia with a score of more than 200 points.

At the Golden Spin of Zagreb event on Saturday at the Dom Sportova, Kim earned 131.12 points in the free skate, 60.6 points in technical elements and 71.52 points in program components, totaling 132.12 points, but a point was deducted due to a triple lutz mistake.

Adding in the 73.37 points she earned in the short-program, she finished with a total of 204.49 points, winning the event by a huge margin.

Japan’s Miki Ando finished second with a total of 176.82 points.

Kim’s 71.52 program component score was her third highest after the program with “Les Miserables” (73.61) in March and when she performed to George Gershwin’s piano “Concerto in F” (71.76) at the 2010 Vancouver Winter Olympics.

She wore a black dress and showed off her elegance and energy while performing to the high-tempo tango music “Adios Nonino” for four minutes and 10 seconds.

It was the second time Kim has skated to tango music after her impressive senior debut with “El Tango de Roxanne” in the 2006-7 season. Kim also became the first skater to earn more than 200 points in the Golden Spin event.

“I’m satisfied with the outcome in Croatia,” Kim told reporters. “But I made a mistake in performing the program’s most important jump [triple lutz]. I feel like I need to improve on my jumping and spinning skills. I also need to improve my stamina to prepare for next year’s Sochi Winter Olympics.”

Before the event, Kim said she regretted choosing this music for her free skate because it demands a lot of movements and diverse emotions.

The foot injury she sustained in September occurred when she was practicing the program. Kim was supposed to participate in the International Skating Union’s Grand Prix events in Canada (in October) and France (in November), but she had to withdraw due to the injury.

In November, Kim said she was fully recovered and chose this Croatia event to unveil her new programs for the Sochi Games.

The music “Adios Nonino” didn’t give her a second to relax. She had to keep moving to the tango music’s unique beat and fast tempo.

“That program demands a lot of movements, including steps,” said figure skating analyst Bang Sang-ah. “And she successfully expressed emotions that are included in the music while performing those high-level techniques. Just like Kim’s choreographer David Wilson says, Yu-na is the only skater who can perform this program.”

“Adios Nonino” is a song by Astor Piazzolla of Argentina in memory of his father.

“Since it was the first event of the season for me, I focused on many technical things like jumping and spinning,” Kim said.

“I think I have finished this one well, though there were some mistakes. But I’m satisfied I didn’t make any big mistakes. As I have about two and a half months until Sochi, I will do my best to get back into perfect shape.”