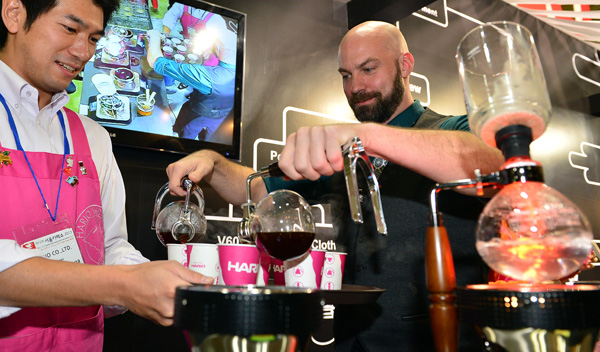 Mr. Kim, a 60-year-old retiree, has recently picked up a new hobby. Every day, he drip brews his own coffee at home and offers samples of his specialty to family and friends.

“I’ve been drinking coffee all my life,” Kim says. “When I was working, my daily routine was to visit a coffee shop and take away a cup. But now, one of my joys is brewing coffee myself at home and sharing it with others.”

After he retired, Kim enrolled in a private coffee academy near his neighborhood in Hannam-dong, central Seoul. That is where he learned the skills of roasting and brewing coffee.

“Seeing how people enjoy the taste really brightens up my day,” Kim says.

Last month, the largest exhibition hall at COEX, southern Seoul, was packed with coffee lovers like Kim. They included people in their early 20s, whose love for coffee has just blossomed, and people in their older years, whose love affair with the caffeinated drink dates back decades. They were all visitors to the Seoul International Cafe Show.

In one corner, visitors in brown aprons attended a hand-drip coffee lesson while on the other side of the exhibition hall, visitors carefully checked out booths that displayed different kinds of coffee beans. Some booths had fancy macaroons, cakes and handmade chocolates to eat with coffee.

Koreans’ love for coffee has grown immensely and the industry has risen with it. Aside from the big coffee chains, coffee lovers are discovering the joy of brewing coffee at home - and discovering the dizzying array of products they can use. According to the online marketplace Auction, estimated sales of home coffee-making equipment, including coffee makers, espresso machines and hand-drips, jumped 180 percent in 2012 compared to the previous year. In the first 11 months of this year, sales increased 105 percent.

In particular, sales of espresso machines soared 17 times in 2012 from the previous year. This is a sharp contrast to 2011 when sales of coffee-related items only grew 15 percent compared to the year before.

“Espresso machines and capsule coffee machine related items have been popular since last year,” said Oh Hye-jin, an official at Auction. “Demand for small-sized espresso machines has been high, mainly because of the overall coffee boom and also the rising number of single-person households.”

Data from Statistics Korea shows that each Korean household’s average monthly spending on coffee - including instant and capsule-coffee products - was 8,254 won ($7.80) in the third quarter, which was up 4.9 percent from the previous three months. The amount excludes spending at coffee shops. The amount had declined 1.4 percent to 7,872 won in the second quarter of this year compared to the first quarter, which was the first drop in six years.

“The price of unroasted beans has dropped lately, which brought down prices of roasted beans,” said a coffee importer who supplies beans to local department stores. “With prices dropping, sales of roasted coffee beans among consumers here in Korea have increased.”

The price of unroasted coffee beans dropped to 117.58 cents per pound in June, about 9 cents cheaper compared to the previous month. When comparing it to a year earlier, the price was almost a 28 cent drop, according to data by the International Coffee Organization.

The price started dropping last year after the average price hit a high of 210.39 cents in 2011.

However, the volume of unroasted beans imported to Korea dropped 1.6 percent in the same period. Industry analysts say Koreans are now looking for quality in their coffee and prefer drip-brewing coffee on their own rather than opening a packet of instant coffee mixed with creamer and sugar.

Unroasted beans are mainly imported by instant coffee manufacturers to make instant-coffee-mix products and ready-to-drink coffees. They are also directly sold to local coffee shops that do the roasting themselves. Individually owned coffee shops tend to import their own coffee beans through small importers.

And big coffee chains continue to do well. In 2011, there were only 394 Starbucks stores in Korea. Currently there are 575 stores, according to the company. The number of Cafe Bene stores has increased from 670 in 2011 to 907 this year, the company said.

The growth came despite the Fair Trade Commission’s decision recently to prohibit large chains from opening a new store within 500 meters (547 yards) of existing stores. The rule only applies to local coffee chains like Cafe Bene, Angel-in-Us, and A Twosome Place.

They continue expanding regardless.

In August, Cafe Bene celebrated the opening of its 1,000th store, including stores overseas. (In Korea there are 907.) Ediya also celebrated the same milestone in October.

Demand for coffee - whether it be homemade or not - just continues to grow.

A USDA Foreign Agricultural Service 2012 study also showed that Koreans drink coffee five times more than the average of the Asia-Pacific region. Koreans were estimated to consume 1.9 kilograms (4.2 pounds) of roasted coffee per capita in 2011.

“There is definitely a growing interest and curiosity among Korean consumers in the world of coffee,” said Jacob Mammen, managing director of Indian coffee grower Bandra Estates and Industries. He was one of the participants at the Seoul International Cafe Show.

Mammen grows special beans dried with ocean breezes on India’s west coast. His company produces up to 850 tons of beans per year, among which more than half is exported. Korea is a growing market for him.

“European countries are our main clients, but Korea is emerging as an important market,” he said, while gazing at a group of visitors to his booth. “Look at them: I’ve never seen consumers so passionate about beans, tasting them and taking photographs. Not even in Italy, the home of coffee and the biggest buyer of Indian coffee beans.”