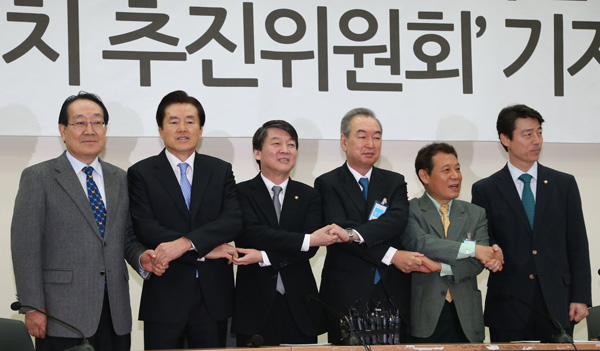 Independent lawmaker Ahn Cheol-soo, third from left, announces yesterday at the National Assembly in Yeouido, Seoul, the formation of a committee that will be integral in creating his new political party. Co-chairs of the committee are, from left, Lee Kye-ahn, Kim Hyo-seuk, Park Ho-koon and Yun Jang-hyeon. Lawmaker Song Ho-chang, Ahn’s former campaign manager, is on the far right. By Kim Hyung-soo

Independent lawmaker Ahn Cheol-soo announced the formation of a committee yesterday that will be integral in creating his new political party. However, the former presidential candidate has yet to attract any political heavyweights to his circle.

Ahn held a press conference yesterday outlining his road map for the committee, which will oversee the launch of his new party.

Four co-chairs, including a former science minister in the administration of late President Roh Moo-hyun, a Jeolla-based civic activist and two former Democratic Party lawmakers, will head the panel.

There are so far no female politicians or incumbent lawmakers in the committee’s leadership.

Park Ho-koon, a renowned scientist, formerly worked as a minister under the Roh administration and previously led the Korea Institute of Science and Technology, a top state-run research institute that specializes in cutting-edge technology. He also chaired a green energy forum between 2008 and 2010 under the government of President Lee Myung-bak.

Park is currently the president of the Korean German Institute of Technology in Seoul.

Activist Yun Jang-hyeon leads the civic group “Gwangju Jeonnam (South Jeolla) Vision 21,” as well as a left-wing Catholic group in Gwangju. He was also a senior adviser for the National Human Rights Commission of Korea.

Kim Hyo-seuk and Lee Kye-ahn, two former Democratic Party lawmakers, are currently set to round out the committee. Kim, a senior DP member, was a three-term lawmaker; and Lee, who served as the president of Hyundai Motor and Hyundai Capital, won the 17th National Assembly election.

Lee recently left the DP to join Ahn’s circle, while Kim hinted at his intention yesterday to move to the committee.

When asked why he did not select a Gyeongsang- or Chungcheong-based figure for his panel, Ahn replied, “I will become a member of the committee, and I was born in Busan. Song Ho-chang [a former Democratic lawmaker and a close aide to Ahn] is also from Daegu. And we could appoint additional co-chairs for the committee.”

Ahn and his aides refused to offer any additional information on the members of the panel, saying they would make another announcement next week. Speculations have surfaced that the four co-chairs would likely run in the coming local elections, including in the Jeolla regions or in the Seoul mayoral election in June 2014.

Ahn denied any plans to recruit an incumbent lawmaker to his committee, saying he could never attract any to his party.

Choi Jang-jip, a politics professor at Korea University, and Yoon Yeo-joon, a former environment minister - both former aides to Ahn - have left Ahn and expressed disappointment in his political venture. Choi confirmed that he had no role in Ahn’s inner circle, while Yoon criticized Ahn for his “missed timing in creating his own political party.”

The ruling Saenuri Party also criticized recent moves by the independent lawmaker. Representative Yoo Il-ho, a Saenuri spokesman, said at a press conference yesterday that Ahn “still has no concrete idea on his slogan of ‘new politics’” and that his new party “should not be a place to attract losers from other parties.”

Meanwhile, the Democrats have called Ahn “a competitive partner.” Spokesman Park Yong-jin yesterday urged Ahn “not to cause a rift in the opposition parties,” as it would only serve to be a political advantage for the ruling party.