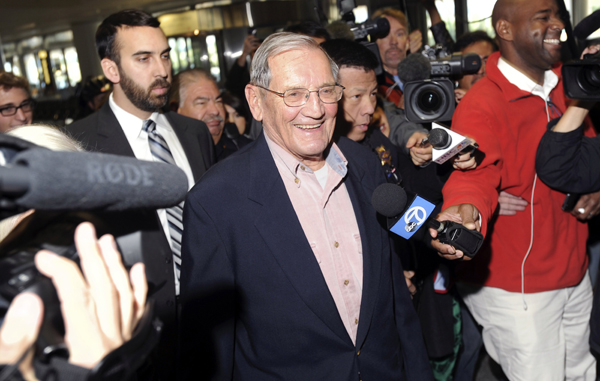 An 85-year-old American man who was held captive in North Korea for more than a month for alleged “hostile acts” against the Communist state, landed safely at the San Francisco International Airport at 9 a.m. local time on Saturday.

Merrill Newman’s return home ended a sensational and unexpected ordeal in which the Korean War veteran was escorted off a plane by the North’s authorities prior to his departure on the last day of a guided tour there.

“It’s been a great homecoming,” a smiling Newman said before a crowd of reporters and supporters assembled at the airport.

“I am tired, but ready to be with my family,” he added.

Accompanied by his wife, Lee, and son, Newman thanked the Embassy of Sweden in Pyongyang and the U.S. Embassy in Beijing for their efforts to secure his release.

He declined to offer details about his 42-day detention there, such as where he stayed in Pyongyang and how he was treated.

Pyongyang’s detention of an elderly military veteran has underscored the North’s long-held sensitivity to the 1950-53 Korean War, as well as its tendency to make unpredictable and puzzling moves.

On Oct. 26, Newman was whisked off a plane in Pyongyang minutes prior to departing for Beijing after a 10-day trip to the reclusive state. North Korean authorities cited Newman’s “hostile acts” against the state as the primary reason for his detention.

A month later, on Nov. 29, the Korean Central News Agency, the North’s official news agency, released a video of Newman reading an awkwardly worded apology - widely considered a coerced statement - in which he expressed regret for his wartime past and visiting North Korea.

“I have been guilty of a long list of indelible crimes against DPRK government and Korean people,” Newman said in the video.

DPRK is an abbreviation for the Democratic People’s Republic of Korea, the country’s official name. In the letter, Newman also apologized for killing North Koreans during the war.

The confession was seen as a necessary step for Pyongyang before it could release the elderly American, as it considers itself under assault from the outside world.

During the conflict on the peninsula six decades ago, Newman supervised a group of South Korean guerrillas who infiltrated enemy lines. Members of the anti-Communist guerrilla group trained by Newman considered themselves “the most hated and feared fighters across the border,” according to the Associated Press.