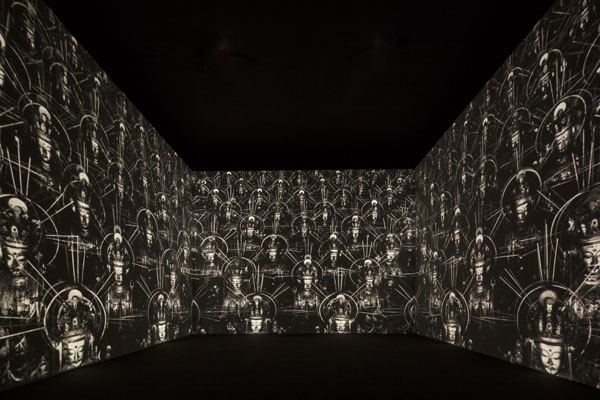 The video work “Sea of Buddhas,” projected on three walls of a black box, is part of a solo show by Japanese conceptual artist and photographer Hiroshi Sugimoto in Leeum, Samsung Museum of Art. Provided by the museum

Black-and-white portraits of Henry VIII and his six wives by Japanese artist Hiroshi Sugimoto are now on display at Leeum, Samsung Museum of Art, in central Seoul.

And it’s a certainty that the eerie images will arouse viewers’ curiosity.

The labels indicate that they are photographs. Yet, the faces of the 16th-century English monarch and his queens, two of whom he ordered beheaded and two others he divorced, look uncannily similar to those in well-known portrait paintings.

Still, they look too much like paintings to be reckoned as photographs of contemporary actors dressed in old costumes. On the other hand, their hands and the details of their clothes don’t look like they were recreated by brush strokes. Rather, they appear 3-D.

These photos might be acknowledged as realistic representations of historical figures. But, actually, after being reproduced in so many different forms, the changes are subtle but real. In these works, this is precisely what Sugimoto is questioning ­­- whether photography faithfully represents reality and whether the history we know is true.

“History is artificial; it is the victim of the survived,” the artist said during a press meeting at Leeum last week.

Sugimoto, 65, has been more of a conceptual artist than a photographer over the past four decades, even when photography was not yet considered a fine art.

Born in 1948 in Tokyo, he relocated to New York in the mid-1970s, according to the museum. There, he began to develop his own art practice, which “combined conceptual thinking and formalistic simplicity” under the influence of post-modern thought. That included questions about whether photography conveys the truth. 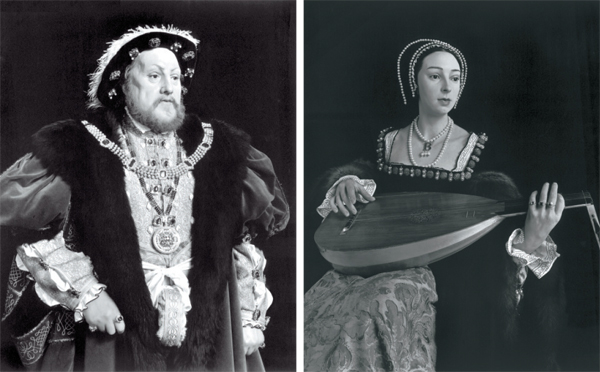 These portraits of 16th-century English monarch Henry VIII, far left, and his second wife Anne Boleyn, left, are part of Hiroshi Sugimoto’s exhibition. The portraits are photographs of wax figures based on historical paintings. The show is full of multilayered historical

Sugimoto’s conceptual artistry regarding truth and photography was apparent, not only from his “Portraits” series, which was commissioned by Deutsche Guggenheim in 1999, but also from his “Dioramas” series, which he started in 1975.

The series, part of which is also included in the exhibit at Leeum, made him well known in the art world.

For the series, he photographed dioramas of prehistoric life at the American Museum of Natural History in New York. The results look as if they were documentary photos of real animals due to his expert handling of angles and light.

Still, it is a surreal experience for viewers as the animals and landscapes are almost unrealistically calm and peaceful. It is anticipated that when the viewers learn that the works are actually photographs of museum dioramas, their conceptions about photography will shatter.

In response to that idea, Kwak June-young, curator of the exhibition, quoted American art theorist Rosalind E. Krauss: “By visualizing time and overcoming its ghost-like intangibility, photographs can testify more directly than any other medium to the presence of its subject at a specific point in time due to its presupposing physical relationship with its subject as an index.”

Accordingly, photography has served as one of the most authentic tools for representing reality and recording history, she explained.

“However, Sugimoto obscures these characteristics with his photography in relation to existence, time, memory and history,” Kwak said.

Sugimoto often uses long exposures to condense duration and the continuity of time, nullifying the idea that photography captures only one point in time.

“Theaters,” a work that represents this idea, is on display at Leeum.

For this series, Sugimoto went to old movie theaters and fixed his camera toward the screen. He left his camera’s shutter open during the entire run of the film. And as a result, the scenes of the movie overlapped to become a single white screen, while the interior structure of the theater, often overlooked in the darkness during movies, exposed its beauty. 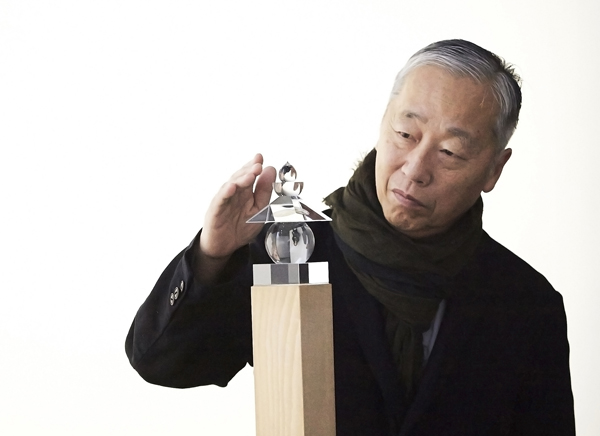 Hiroshi Sugimoto touches one of his “Five Elements” works.

As time is materialized into light, the film’s illusion of concrete images with a single narrative disappears.

“Both existence and absence co-exist within the photograph,” Kwak said. “From the viewpoint of Buddhist philosophy, nothingness reveals the truth of existence.”

Declaring himself “anachronistic,” Sugimoto insists on using black-and-white film in this era of digital cameras, using a rare, 19th-century-style, 8-by-10 large-format camera and a silver gelatin printing technique.

Asked why he uses only black-and-white photography, he said, “My photos are not actually black and white. They have hundreds of tones and nuances, so it will be better to call them monotone photos.

Sugimoto uses 19th-century photography techniques. But it’s not so much that he loves retro style as much as it is his interest in various attempts made in the field of photography throughout history.

That is reflected in his latest series “Lightning Fields,” which he started in 2006.

Inspired by British inventor William H. F. Talbot, Sugimoto made artificial lightning with electricity and achieved exposure without the help of a camera.


The exhibition runs through March 23.

Go to Hangangjin Station, line No. 6, exit No. 1 and walk five minutes.