Going with the flow (of the wine)

Going with the flow (of the wine) 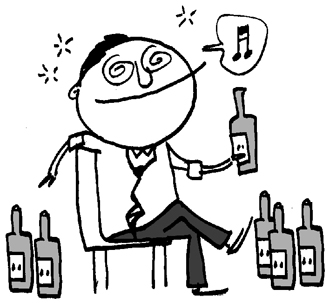 It’s funny how words can inform and mislead. When I first came to Korea in the mid-1970s, I often was enchanted and confused by the similarity of Korean and Japanese. For example, I stumbled across the word “judo.” Was it the martial art? No, that was “yudo” in Korean. It turns out that in at least literary circles, judo refers to the “way of wine.”

Looking at the Chinese characters that originally formed the word, it was easy to recognize the first character, “ju,” from other uses of the same, referring to alcoholic beverages - often simplistically translated as “wine.” The second character, “do,” was the same as in Japanese, but as “tao” in Chinese. That character can be translated concretely as “path,” but it often connotes a more philosophical and spiritual meaning of “way.” The term Taoism traces its roots to this character.

Getting back on path, the reader may recall seeing in museums Joseon paintings of Taoist immortals holding wine cups with inebriated smiles. And this is very much at the core of a number of some of Korea’s more illustrious - and many more not so illustrious - poets and writers, often seen frequenting drinking establishments. So much so, as a Korea neophyte, I once thought the country’s moniker, “Land of the Morning Calm,” referred to so many of its inhabitants nursing their hangovers.

Today, the name of the poet, Professor Jo Ji-hun of Korea University, is still well known in drinking circles. He passed away a good 40 years ago. But before he went on to that Happy Winehouse in the Sky, he penned a brilliant essay. The gist of his treatise’s observations, I summarize below.

Essentially, there are 18 distinct levels or ranks of Korea’s judo. Accomplished imbibers generally scoff at the first four, but to get them out of the way, here they are: First is the “geum-ju” or teetotaler. The second is the “wei-ju,” who is held in even greater disrepute than the bul-ju, as he is the chicken drinker who sips a little but worries too much about intoxication. Third is the “min-ju,” or the “hangover-phobic” - someone whose paranoia of an impending hangover inhibits his drinking. And the top of this bottom class is the “eun-ju,” who secretly drinks alone rather than join a group and thereby having to take a turn in paying for the group’s drinks.

The next higher category also consists of four levels. While an obvious cut above the lower grouping, this group of “utilitarian” drinkers leaves their dedicated colleagues shaking their heads in pity. The lowest level in this group is the “sang-ju,” a term reserved for those who may actually like drinking, but primarily drink for business and whose goal for the evening is something other than drinking.

Next are “saek-ju” drinkers who, too, have alternative objectives to simply enjoying alcohol. They drink to achieve their carnal objectives. Above these cads are the “su-ju” or nightcap drinkers who may or may not be insomniacs, but surely crave a shot before hitting the sack. And finally, there are the “ban-ju,” who use drinks primarily for aperitifs before dinner.

It is in levels nine and upward that imbibers command respect as “serious drinkers,” some of who strive to advance in rank with the same dedication as a martial artist.

The bottom of this top half begins with the “hak-ju,” or novice drinkers, where through experience and regular practice do the essentials of the art become known. In the next rank up are the “ae-ju” or drinking aficionados. Above whom are the connoisseurs of developed tastes and opinions of alcohol, the “gi-ju.” Higher yet are the “tam-ju” who are respectfully regarded as accomplished drinkers, capable of indulging freely. But even they pale in comparison to the fanatic drinkers of the “pok-ju” grade who need no explanation for their achievements. No. 6 in the top 10 are the “jang-ju,” or who I call the “Taoist drinkers,” given their perpetual drinking that brings the Taoist immortals to mind. In fact, at this level there is a spiritual dimension where the Buddhist term of “sam-mae” of self-forgetfulness seems appropriate - or as the Taoists may put it, this group consists of the “ju-sun,” the immortal drinkers.

For the very dedicated few comes the next rank of “suk-ju” mellow drinking as they achieve a subconscious understanding of the universe through alcohol. Floating above them are the subliminal drinkers known as the “nak-ju.” It’s at this level one may reach the highest level of actual imbibing; so high a state is this that one no longer cares whether one drinks.

If one is capable of rising yet higher, one realizes that all good things must come to an end, including bodily participation in judo. Here one finds the “gwang-ju,” or the retired drinkers, who are no longer physically capable of drinking, but who can still find immense satisfaction by merely observing others indulging. In fact, by simply meditating on the beverages before them, these former drinkers can be swept to states of blissful intoxication by their memories of climbing up the ranks. And finally, for the most dedicated and faithful, comes the Way of Wine’s loftiest level - “pae-ju” or nirvana, where the very precious few may join Dr. Jo in that particularly peaceful corner of heaven, where all good and accomplished drinkers eventually go.

Perhaps only the Koreans could have taken this form of social interaction and elevate it to a level of cultural sophistication. It is truly something worthy of admiration and respect.


*The author is president of Soft Landing Consulting, a sales-focused business development firm, and senior advisor to the IPG Legal group.