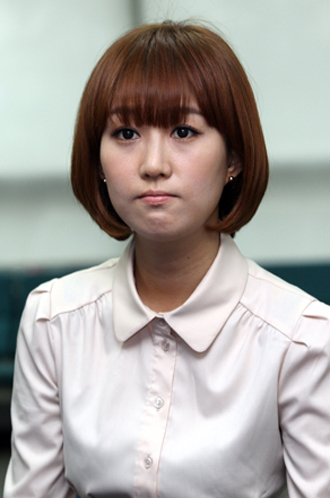 Singer Jang Yoon-jung, who married KBS announcer Do Kyung-wan in June, is pregnant, her agency confirmed, and she is due to give birth in June 2014.

After Nam’s statement, Jang’s agency confirmed the news and said she is 13 weeks along.

A condemning letter from the singer’s mother was also made public a day earlier. The letter was uploaded on a blog critical of Jang a day before the announcement.

“Give birth to a daughter just like you,” her mother cursed.

In the note, Jang’s mother said she had not raised her own daughter to be grateful and that she would not endure Jang’s conduct any longer.

The disputes between Jang and her kin were made public after she shared her family history on the SBS talk show “Healing Camp” earlier this year. On the show, she talked about how she ended up losing everything because her mother excessively invested in her brother’s businesses.

After the show, her brother Jang Kyung-young slammed her story, further denying any financial wrongdoing. Jang’s mother also commented on the matter, saying she was OK with Yoon-jung’s attack but not the remarks Jang made about her own brother.